Sets across. Use a “slower down-faster up” tempo. Heavier than last week if you can. Aim to finish each set feeling like you have another rep in the tank.

There are only 10 Dips per round, but it is 50 total so be smart about breaking them up as needed, or modify to Matador or Box Dips. Scaling volume to as few as 5 per round is also acceptable, make sure to perform them through full ROM in any case. 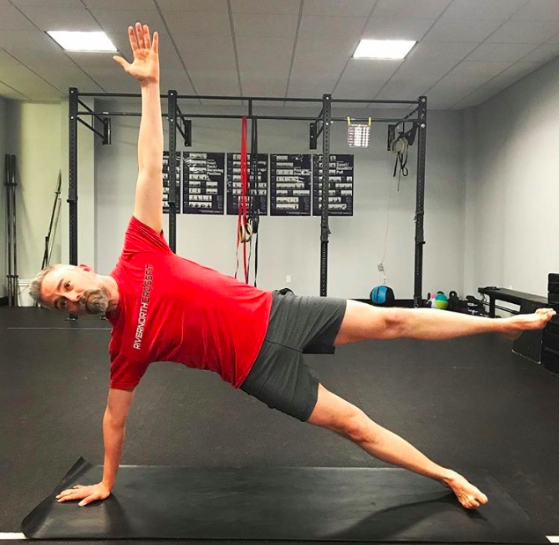 When and why did you begin your journey at CrossFit South Brooklyn? What were you doing fitness-wise prior?

It’s been awhile, so I can’t really remember all the details. I think I joined 6-ish years ago, it was shortly before CFSBK hosted the Open Workout 13.2 announcement. I can’t remember how I found CFSBK specifically, but I live on Degraw so it may have just been a proximity thing. Before becoming a member I had zero experience with weights. At the time I was doing a lot of running (had done a few marathons and a bunch of half-marathons) and was doing a couple triathlons a year. I was reading a lot about CrossFit and thought it could help with my running, so I gave it a try.

What were your initial impressions of the CFSBK environment?

Initially, I was confused as to why it seemed everyone HAD to drop their barbells and make so much noise. I was very focused on placing my barbells down, a habit that Arturo quickly helped me get rid of, thankfully. I also was a bit overwhelmed. There was a ton of crazy stuff happening all over the place, I didn’t understand it, and it all felt very foreign to me. And to be honest, I was intimidated by the place. As I said, I didn’t know this world, and I very much felt outside my element. But my interactions with the coaches were great, and the people I met seemed nice, so I kept coming back.

What’s your “athletic” background, even if it was being the 1999 thumb wrestling county champ?

I was a hurdler, high jumper, and cross country runner in high school, and then nothing for a few years. In the mid-90s (so old!) I started doing yoga and have kept up with that over the years. I took my first Pilates class while I was living in London in the early 2000s and got really into it, and that passion has sort of snowballed over the years. I had a nasty breakup in 2009 (he was a total dick, just sayin’), and I needed to focus on me and find a way to challenge myself in a different way, and that was when I got back to the running and doing triathlons.

Where did you grow up?

I grew up in the suburbs of Detroit. I’m proud of where I’m from and go back often, but am thankful every day that I got out! I was a skinny gay kid, and back then Michigan just couldn’t offer me what I wanted to get out of life. But I love going back to Detroit and get there several times a year. My family is still there, and while they drive me crazy, we always have a good time together.

How’d you end up in Brooklyn?

There used to be a joke that God looked down from heaven at the United States and yelled to all the gays, “GET TO THE SIDES, GET TO THE SIDES!!” So when I finished grad school, it was going to be either California or New York. I was fortunate enough to get job offers in each, and just decided NYC was more “me.” When I moved here I wanted to live alone and realized it would be more affordable to do so in Brooklyn as opposed to Manhattan. I found a tiny apartment in Carroll Gardens (where the only sink was in the kitchen, which made shaving fun) and have been in the neighborhood for the past 20 years.

How do you spend your days?

I’m an HR executive at an asset management company (sooooooo boring!). I like to think I bring a healthy dose of empathy, connectivity, integrity, and practicality to what is often seen as a fairly harsh industry. Additionally, I’m spending a ton of time in the Pilates world at the moment. Part of my master life plan is to eventually leave the corporate world and become a Pilates instructor. I’m in the middle of a 6-month training program that requires about 15-20 hours a week of observing, teaching, and doing Pilates.

What are your hobbies other than CrossFit?

My friends make fun of me because I always have something new I’m getting involved in. (They’re still wondering when the CrossFit thing will wane, *eye roll emoji*.) I consider myself a “serial dabbler.” Life is for living, so go out and try a bunch of different shit and find out what you enjoy doing and where your passions are. I have my PADI certification for scuba diving (meh…doubt I will do it again). I also have a certification to be crew on a sailboat (which I know I won’t do again, too much work… give me a pontoon boat and a Swell bottle filled with Aperol Spritz any day). My latest thing is making sourdough bread. Love that fermentation! I’m also a huge traveler. I’m taking my nephew to Japan at the end of summer. A couple other members have been great with sharing the itineraries of their recent trips, but if anyone else has any suggestions, I’d love to hear them!

If you could place an ad in the NYC subway system, or on a huge billboard in Brooklyn that people would see every day, what would it say?

Stop using so much plastic, asshole.

What were your initial goals in the gym, if any, and what are you working on now? What did you struggle with at first or what are you most proud of for improving? How has CrossFit (the training itself, or the community) changed you?

When I first joined my goal was to improve my running, and I think that has happened, so mission accomplished. But then I developed plantar fasciitis and the running had to be put on the shelf for a couple years while I sorted that out. So I turned to focusing on developing CrossFit specific goals. At first I had no idea what I was doing in the gym. I remember my first class after foundations was a Snatch class. I left that day thinking, “Oh hell no. This isn’t going to work.” So I started doing privates with Arturo. He was patient, instructive, clear, and just generally a great coach. He definitely helped me understand the movements and gain confidence in what I was doing. Once I got back into group classes I started to set periodic intentions for the practice. There was the year of the Pull-Up, the focus on the Low Bar Back Squat, the Handstand Walk goal (which hasn’t really materialized). As I get older, my goals become less micro and more macro. I don’t have a certain weight I want to Squat, or a number of Muscle-Ups I want to get (spoiler, its zero). My priority is on longevity and vitality more generally. How can I live a longer, healthier, happier life, and how can CrossFit play a role in meeting that objective? That’s where I’m at now.

Do you (or have you) participate in any special programs at CFSBK?

I have, I have! It’s so exciting seeing the growth of so many different kinds of programs. As I said, I did private sessions with Arturo in the early days (fabulous). I did CRASH-Bs a couple years ago. Everyone should do CRASH-Bs! It helps your rowing so fucking much. It’s amazing. And how often do you get to say you trained with an Olympian, I mean come on. I’ve had some back issues that keep popping up and so did Active Life Strength with Keith, which was awesome and helped a huge amount. I did Starting Strength Program and my gains were unbelievable. Even more importantly I learned things about how to lift from Jeremy that I use every single day I’m in the gym. I also try to get to as many CFSBK Pilates, Active Recovery, and Short Circuit classes I can get to, cuz they’re all fabulous! I also did Precision Nutrition coaching with Mr. Christian Fox himself. It was quite a 12 month journey with some things that I really enjoyed, and other things that made me roll my eyes HARD. Overall, I thought the Precision Nutrition coaching experience was fantastic, rewarding, illuminating, and I would highly recommend it to anyone who wanted to up their nutrition game.

What piece of advice would you offer to someone just starting CrossFit?

Keep coming, listen to the coaches and do what they say, step out of your comfort zone, ask for help, be friendly, and put your shit away when you’re done using it.

I could talk about so many things here (the coaching, definitely, the community, yadda yadda), but just having wrapped up Pride month I gotta talk about the sense of inclusivity I feel at the gym. As a gay man, I can definitely say that I have been to gyms where I haven’t felt welcomed or even safe necessarily. The drive for inclusivity at CFSBK has been overt and palpable from the start for me. I love that there’s a Pride flag (and Trans flag too now) up, not just on the 4th Sunday of June, but all year round. I love that we did the “Stonewall “workout the other day and raised a nice chunk of cash to further queer rights. And it’s not just for the queer folk out there. I LOVE LOVE LOVE the new Adaptive Athlete Program and can’t wait to see how it evolves. Iron Maidens and the scholarship it provides makes me so proud to be a member here. I could go on and on, but I think you get where I’m going here: words, symbols, actions, impact. You go CFSBK!

What qualities are important to you for a future AOM?

I think someone who embody that sense of inclusivity is really important for me to see in a future AOM. Looking towards the silent fitness warriors as well as the gregarious ones in the crowd. Someone who is positive, friendly, supportive, and helpful to others. And someone who puts their shit away when they’re done using it.