Notes
Rest as needed between sets. 3-4 minutes potentially. Only lift as heavy as you can move with excellent technique and make sure you can hit all your reps. You’ll need a switch grip or hook grip to get through these. 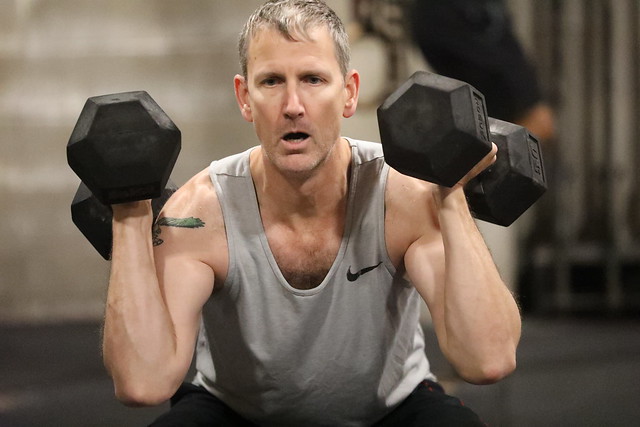 King Charles in the heat of battle

More than 10 years ago, a 22-year-old David Osorio became the proud owner of a CrossFit affiliate.

He started training people at 7 a.m. on Sept. 19, 2007, at St. Mary’s Playground in the Carrol Gardens neighborhood of Brooklyn, New York. The affiliate’s first workout was 5 rounds of 30 seconds at each of the following three stations: body-weight rows, 50-m sprints and PVC thrusters.

“I had known that I had wanted to own my own gym since I was 17. That was my plan,” Osorio recently explained during a visit to CrossFit Inc. in Northern California. “And I knew that I wanted to do something different and special and kind of community based and inclusive. But I didn’t really know what that was. I just knew that the model of gym that I was familiar with—that was not what I wanted to be, where people just sort of come in and do their own thing.”

Four years earlier, as Osorio pursued a degree in exercise science from West Chester University in Pennsylvania, he worked as a personal trainer at a local YMCA. There, a police-officer buddy told him about CrossFit.com. That was in 2003. Osorio dove in head first.

“I think I got a better education watching all the old videos and (CrossFit) Journal articles than I did in four years of college. It was just so intuitive. (I was) like, ‘Yes, this is it. This is exactly what I’ve been looking for.’”

He hatched a scheme: finish his degree, move to New York, open a CrossFit affiliate.

Read the full article from 2018 on the CrossFit Journal