The barbell should be on the medium-light side and unbroken. Stepping in/out on the Burpee and up to the box is allowed. Choose a height that’s in your comfort zone and allows you to move continuously. The intent is to stay out of the “pain cave” and perform each piece at a sustainable and repeatable pace across each round to within a point or two. Signs that you’re in the right zone are: consistent split times, a focused yet relaxed facial expression, and the ability to maintain nasal breathing throughout. These workouts should feel slightly harder than Thursday’s workouts. 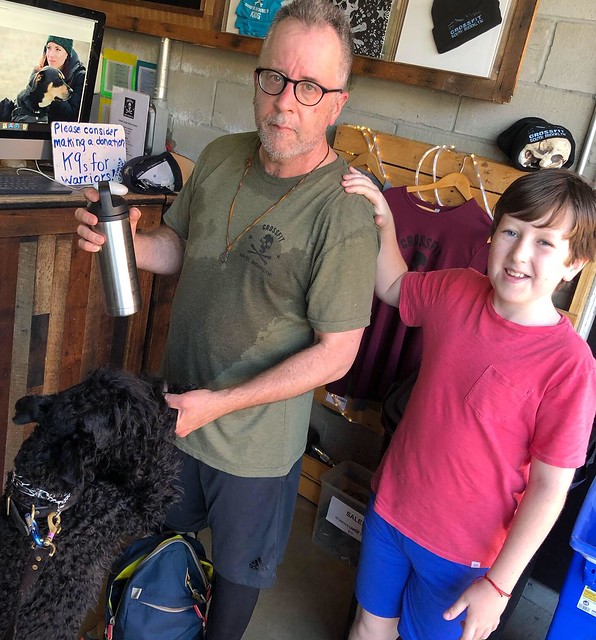 Here we are again! We coaches are lucky to have so many wonderful members working on themselves within the walls of 597 and 608 Degraw Street. So much so that sometimes it’s challenging to pick just one each month. However, when Paul’s name was mentioned, he, like so many AOMs before him, was an obvious choice. From Silicon Valley before Silicon Valley was a thing, Paul is quite a humble jazz saxist who you may have caught onstage during his band’s set at last year’s CFSBK Art Show. Read on to learn a little more about the guy some folks know as “Benny”…

Hi Paul, and congrats! Like all great stories, let’s start at the beginning. When and why did you begin your journey at CrossFit South Brooklyn, and what were you doing fitness-wise prior?

Thank you! I’m humbled and honored. As almost any coach will tell you I have a long way to go. I started almost three years ago. I had been a member of various New York Sports Clubs over the years, but not very happy with them and never entirely engaged. So, I would quit, rejoin six months or a year later, and so on. It always seemed like something I had to do, rather than something I wanted to do. And I never had a plan, so I spent a ton of time running on treadmills, perhaps the most boring thing imaginable, or aimlessly using the machines.

At one point about 12 years ago I worked with a guy who was one of the first kettlebell trainers in New York City—he operated in a mixed-martial arts gym in midtown. Kettlebells are ubiquitous now, but there was a time when they weren’t common. He put me through some rigorous workouts with kettlebells and battle ropes. That was during the six months before my son was born, after which I stopped.

My wife and I used to pass by CFSBK occasionally, since my son did summer camps at Brooklyn Boulders and the Brooklyn Fencing Center. It looked intriguing, and we’d always vow to check it out sometime. One day she told me she’d signed us up for foundations. I didn’t really know what to expect—I wasn’t even sure what CrossFit was—but I went and never looked back.

Great story. Though having Theo created a break in your kettlebell routine those years ago, I guess he eventually led you back to fitness and to us! What were your initial impressions of the CFSBK environment?

I thought it was cool from the moment I walked in the front door. Brett taught my first foundations class (I was lucky to be the only person for the first class or two, until someone else, also named Paul, showed up), and he made me feel welcome and engaged. I also remember waiting in the front and watching a class and thinking it seemed so cool that all these people were working hard and seemingly enjoying it all. Plus I loved the fact that dogs were allowed. We’d just gotten Took, our Kerry Blue Terrier pup, and I thought it would be fun to bring him around. Now he comes at least once a week.

I remember “Bizarro Paul.” That’s when you told me to call you “Benny.” Also we love that fool of a Took! What’s your athletic background?

My father wasn’t big on team sports when we were kids—he felt it was better to learn sports that didn’t rely on too many other people, and that we would have our whole lives. So I played tons of tennis during my youth, all the way up through the end of college. My game is still pretty good because of all the time I put in when I was young.

Awesome that you still have those racket skills. Sounds like you have a track record for building habits and skills that can last a lifetime. Where did you grow up? Any interesting anecdotes you care to share?

I grew up in San José, California, long before the tech boom. It was a great place to grow up—quiet suburban streets where you could play ball or ride bikes. I have a twin brother and a younger brother. I guess the most interesting thing about my family is that my father was blind. He spent much of his career at the VA, where he and his colleagues developed some of the first reading machines for the blind, and taught people how to use them.

How’d you end up in Brooklyn?

I came to New York from San Francisco in 1996. I moved to Brooklyn Heights not long after September 11th 2001, first to a studio, then to a one bedroom with my girlfriend Courtney, whom I later married. When our son Theo was born, we moved to Boerum Hill. I don’t think I could live in Manhattan again, though I enjoy being there.

Right? I only go to Manhattan for things that don’t exist in Brooklyn…How do you mostly spend your days?

I’m a freelance writer, primarily in the financial services space, with a few steady clients. I worked at Fortune magazine for almost a decade, and so when I began freelancing I found myself in the business/finance niche. When my son was little, I took care of him myself—we never had a nanny. So I suppose you could say I’m really a “stay at home dad.”

Ha! You kid, but what a great opportunity to be able to spend so much time during those years with Theo. What are your hobbies other than CrossFit?

I’m a saxophonist, but I feel like it’s a little more than just a hobby. I moved to New York for the downtown music scene. In the early days I practiced a ton of hours, rehearsed, and played gigs. That’s slowed down a lot, though I still try to practice a little every day. I also study classical composition.

Check out some of Paul’s playing here!

Loved hearing you play at the Art Show last year. If you could place an ad in the NYC subway system, or on a huge billboard in Brooklyn that people would see every day, what would it say?

A quote I love from Thelonious Monk, “Lift the Bandstand,” which for me means that when you give it your all, you elevate those around you.

Great quote, and even better interpretation of it. What if any were your initial goals in the gym, and what are you working on now?

I’m not sure I had any initial goals, aside from “getting fit.” That changed as I got better, understood how things worked, and could begin setting goals for various lifts. I’ve struggled most with the snatch, which requires overhead mobility I still don’t have, though I will keep at it. Handstand push-ups, muscle-ups, and other gymnastics moves are a long way off. But I have gotten better at deadlifts, cleans, and many other things.

What I like and appreciate about the training is the fine-tuning. Sometimes the smallest pointer from a coach can be a major revelation, and lead to improvement.

Has CrossFit changed you?

Being part of the community is awesome. I was quite intimidated when I started, but on my second or third day I met the illustrious Charles Smith, who was very kind and became a sort of guide for me in the early days. Now I could name many people who have been encouraging and supportive, and absolute fun to be around.

There’s a reason why Charles a CFSBK Athlete of the Month alumnus. Do you (or have you) participated in any special programs at CFSBK?

About a year ago I signed up for Active Life Strength with Coach Keith, and ended up doing four or five rounds of it. It turned out to be just what I needed. I’m a little older than most people at CFSBK, and the program helped me improve mobility and balancing (i.e., making a weaker leg or arm stronger), which in turn helped me in group classes. For example, my Squats got much better in ALS — the weight I could handle rose substantially. I’ve also just started Coach Fox’s nutrition program — which I feel will prove to be a key element of my fitness journey.

Dive right in! I waited about a month after Foundations to get going, and I was very nervous during my first few classes. But the coaches will guide you, the other members will support you, and you will be off to the races. There is no need to hesitate.

Everything: the coaches, the members, the physical space, the events. It’s a marvelous ecosystem. It’s always engaging, challenging, and interesting. I can’t imagine going anywhere else, and certainly not quitting. As long as we’re in Brooklyn, I’ll be showing up.

Shucks. Comments like that are always so good to hear and make our commitment as a staff even stronger. What qualities are important to you for a future Athlete of the Month?

Good question. Somebody dedicated to improvement, who embraces the CFSBK ethos, and who “lifts the bandstand” during class.