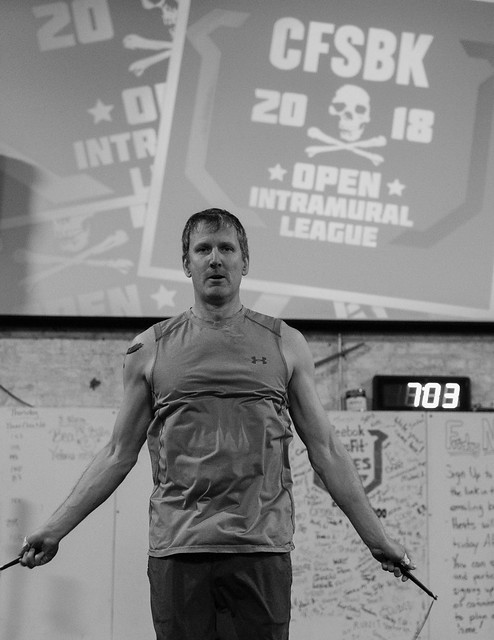 Athlete of the Month: Charles Smith

Charles has so many of the qualities that we coaches think make for a “super member”: someone who does that extra little bit to get the most out of their time spent at CFSBK, while enriching the experience of others as well. Showing up early to work on weaknesses, mindfully listening to and processing coaching, and being an all around positive classmate are just a few of those little things he does that get recognized. While you’ll find him to be generous with support and friendly banter, you don’t want to get caught in a rundown in midtown with him… or a fried chicken cook-off.

Fox: Congrats, Charles! I’m happy to say that you’re our May Athlete Of The Month. Thanks for taking the time to sit down with me.

Charles: Stop it… thank you. It’s really an honor, and I’m stunned.

Fox: When and how did you first wind up at CFSBK?

Charles: I remember exactly, because it was the Sunday of Super Bowl 50, in 2016. Oddly enough, I honestly couldn’t tell you how I found the gym.

Fox: What were you doing training-wise prior to CrossFit?

Charles: I was playing a lot of basketball at the time and going to the gym to support that. I’d go to the Y and do these “10 Exercises to Blahblahblah…” sort of programs straight from magazines, lots of dumbbells combined with the elliptical machine for cardio. I wasn’t making what I would consider progress and somehow ended up taking the Free Intro Class with David that Sunday. Right away I knew that not only could I get better training here, but that I would KNOW how to measure that progress.

Fox: Do you still play ball?

Charles: Not really. I still shoot around but my playing days are mostly behind me. I tore my MCL 2 months after starting CrossFit (an injury not related to the gym) and took it as a warning that I had played enough minutes in my lifetime. Honestly the injury ended up being a good thing for me. It removed some of my initial stubbornness about movements like Squatting, and gave me a fresh start to improve from.

Fox: What were your first impressions of the gym, how it operates compared to something like a YMCA? What made you join and stay?

Charles: I LOVED the systems and the overall process. I liked that right away there was an emphasis on becoming fitter, not just thinner. I work out not to lose weight or necessarily for vain reasons, but to DO STUFF. The emphasis on the doing of stuff here was refreshing. Other than that I thought it was clean and well organized. It just felt different than other gyms. The cycles, the way classes are run, and the variety of class options allows for one to truly receive individualized programming in a group setting. We’re all working together, but you can still choose your own path. I really nerd out when the programming cycles are released and set some individual goals to aim for during them. Plus, being someone who works primarily from home, I enjoy the social aspect of coming to this gym. It’s like the folks in 10am class are my office mates. Also, the coaches actually “coach” here. I’ve not been to many other CrossFit gyms but the coaches at some are definitely not as engaged as is the norm at CFSBK.

Fox: Where are you from originally?

Charles: I’m from Bucks County, Pennsylvania, just outside of Philly. I had a great childhood, and reaped all the benefits of growing up close to both the beach and mountains, and playing in a neighborhood filled with backyards. That being said, looking back it was a pretty insular experience of the world, being in a pretty homogeneous environment. I’ve always been a sports fan and was quickly drawn in to the intense sports culture that Philadelphia has, and I enjoy connecting with a wide variety of people through that. It may sound silly or clichéd, but sports can really connect people in meaningful way.

Fox: Were you an athletic kid?

Charles: I was always playing something. From organized team sports like basketball, track (long jump and triple jump), swim, and tennis. I did it all. If I wasn’t playing in a league I was playing in backyards.

Fox: I’ve seen you over at the Brooklyn Bridge fields with your own kids. Have you passed on the athlete gene?

Charles: I did, and I wasn’t the only one in my family to get it. My brother, who’s 11 months younger, is one of the best athletes I’ve even seen. He and I were pretty competitive with each other for a while but then gravitated to different sports. My daughter, Josie, is a fantastic track athlete and runs the 200 and 400. My son, Owen, is quite a basketball player. His high school team just wrapped up an undefeated season.

Fox: What do you do for work?

Charles: I’m a part of my family’s business, which is mostly real estate development now. I mostly spend my days now working with the venture capitalist firm, Social Starts. It’s really exciting work, and I’ve been part of some exciting companies over the years, like Etsy, for example. When I began with them we were a team of 6, and that number grew to over 75 in my time with them. I really enjoy the conversations I get to have with people who are so passionate about their ideas, and are willing to give all of themselves to make them work.

Fox: What do you do for fun when you’re not at the gym or trying to find the next big thing in tech?

Charles: I enjoy cooking a wide range of foods, and like taking on the challenge of “hacking” famous recipes. I’m pretty good at a Smashburger, can make a mean Shake Shack burger, but my biggest success has been Popeye’s chicken fingers. As I mentioned earlier, I’m a big sports fan and aside from rooting for my teams, I love the analytical side of sports. Data and how it affects team make-up, how GMs build successful teams. That sort of thing really interests me.

Fox: What’s something people might not know about you?

Charles: Hmmm… I’ve got a few things, I think. It’s pretty visible, but the Eagles tattoo on my right arm that I got this year is my first and only one. I ended up getting it through a bet of sorts with a cousin. I once chased a laptop thief through the Madison Square Park area, and caught him. I got the laptop back. I was also a large baby. 11 pounds, 8 ounces.

Fox: I love your tattoo story. First of more maybe? Back to some fitness stuff…what are your current gym goals?

Charles: I’ve had the same goal since day one, to be as prepared as possible when class begins. Currently that means working on hip and hamstring flexibility as well as in my ankles. I try to focus on a few weaknesses and address them automatically when I get to the gym. Movement-wise I’m trying to improve on the Snatch, like almost everybody. I look for drills and exercises that address my particular issues and incorporate them regularly. I’ve also finally begun to run again after a long time away from it, so I’m building up my distance there as well. I try to keep my gym goals action based, and let those actions lead to outcomes. Like, “what can I do” to achieve what I want, instead of focusing on the “want” part of it.

Fox: I like your thought process, Charles. That’s really great advice. Last question: What should we look for in an Athlete Of The Month?

Charles: Someone who is building their own fitness path but still part of the collective experience of CFSBK. Whether that means doing Starting Strength, Next Level Weightlifting, Short Circuit, or whatever. This place allows so many entry points to, and ways to express, functional fitness, so there are so many places to look. I also think the right attitude includes a willingness to fail. Friday Night Lights really showed this in spades. It wasn’t about winning, per se, in that it wasn’t about doing better than anyone else. Just showing up and doing your best was celebrated, and being willing to show up, do your best, and still fail can actually be a win in the larger sense.