Focus first on balance and stability through the foot, lower leg, and hip. Use dumbbells or kettlebells to add load as able.

The bar should not be crashing back to the rack position. Start light enough to use the prescribed tempo and to build in load over six weeks.

Use a double overhand grip and control the tempo, using a switch grip only if you need it. Hook grip is preferred. Start light enough to use the prescribed tempo and to build in load over six weeks. Here’s a useful demo video. 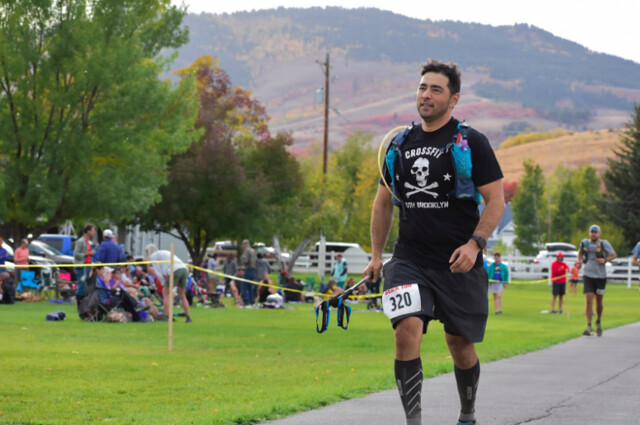 Up next is a guy who—unbelievably—was too nervous to take group classes after completing Foundations. He has since overcome “fitness fears” that most of us easily would rather go around. You might say that he’s made a hobby out of exploring the limits of his abilities and tolerance for discomfort, only to push beyond them when encountered. Run 100 miles in 100 degrees? 30-Mile Spartan Beast Race, including 30+ obstacles? Pishaw. No problem. Azam is someone who certainly lives the qualities he recommends to future Athletes of the Month at the end of this interview. But let’s start at the beginning.

Hi Azam! When and why did you begin your journey at CrossFit South Brooklyn?

I did my Foundations in July of 2013. I came upon CrossFit when I was looking to do some sort of a circuit training-type workout, probably just by having done an internet search on the topic. When I started back in 2013 there weren’t any CrossFit gyms near my area, plus the Yelp reviews made a compelling argument for me to choose CFSBK and stick with it to this day.

Glad you wound up here! What were you doing fitness-wise prior?

Nothing very inspiring for certain. Mostly going to a “regular” commercial gym where I’d jump on a treadmill or elliptical and then use some free weights to do curls.

So this was pretty different. What were your initial impressions of the CFSBK environment?

Very intimidating. Especially, when I saw some of the ladies snatching what seemed like and, in fact, turned out to be, very heavy barbells. It was definitely outside of my comfort zone.

Do you come from an athletic background?

Not sure what would constitute an “athletic” background. I did some Olympic weightlifting back home when I was young but quit after a few months. I dabbled in a little bit of track and field then quit just after a few months, too. I then did martial arts for a little while, and then… you guessed it right… I quit that as well. So as you can see, prior to CrossFit I was not much of an “athlete” and didn’t have an “athletic” background.

Well you stuck with us! I would say you fall firmly into the “athlete” camp nowadays…Where did you grow up?

I was born in a town called Khujand located in the northern part of Tajikistan. I lived there until I was 22, when I moved to the US to go school. I went to a small liberal arts school in Oklahoma and studied Business Administration as my major, which like most people I don’t use, in my day-to-day work.

That’s even further away than Staten Island. How’d you end up in Brooklyn?

My siblings had also moved to US and were living in Brooklyn. Somehow, they managed to hoodwink me into moving to NYC so we could all be closer to each other.

How do you usually spend your days?

Ha! Lately it feels like work, then home, then gym, then home, then rinse and repeat the following day. I work in IT designing computer networks. The way I usually explain what I do is: I basically make the “internet plumbing” work so people and businesses can get to their apps. Although I do go for training runs the days I am not in the gym or and try to make day trips to Bear Mountain for some trail running/hiking on the weekends.

What are your hobbies, weird or mundane, other than CrossFit?

I did obstacle racing for a while and was using my CrossFit training as the base to get through some of those. Lately I gravitate more towards long distance trail running, and have been doing two or three 100 milers each year for the past few. I could tell some stories about those, but the one that’s been seared in my brain involves the toughest 100 mile race I’ve done yet. In northern Georgia… in the heat and humidity of summer in the South. I went through two days and nights where the weather went from 100 degree heat/humidity into hyperthermic torrential downpour by the second night. The “run” turned into a painstaking “one foot in front of the other” expedition where I was just surviving the elements, from high winds on the ridge lines to a mud-sliding slippery downslope.

But don’t let that scare you away! Should you sign up for one, it’s not all bad! Other memorable experiences involve just being in the beauty of nature, enjoying the quiet and seeing wildlife. Recently I was in Southern California and saw a bear and a mountain lion and almost stepped on a copperhead snake. I passed a moose and wild goat during another recent 100 miler in the Cascade mountains. Nothing compares to actually getting into these remote, untouched places and enjoying the beauty of what mother nature has created.

Other than that I pick up a book here and there when I am commuting to work and back. Maybe even dabble in a little bit cooking as part of my meal preps. Between work, family, and fitness, there’s not a whole lot to report on the hobby front I guess.

Wow! Sounds like there’s a pretty satisfying payoff to all the hard work in a race like that. If you could place an ad in the NYC subway system, or on a huge billboard in Brooklyn that people would see every day, what would it say?

I wish I could come up with something profound but all I can think about are the last two lines from the poem “Invictus” by William Henley, “I am the master of my fate, I am the captain of my soul.” I suppose it’s more of a mantra rather than an ad.

What were your initial goals in the gym, if any, and what are you working on now?

Once I was introduced to them I wanted to lift bigger weights, especially on the Oly movements, when I first started. And I still do now! Currently I’m working more on the gymnastics side of things (i.e. Pull-Ups, Handstand Push-Ups, Muscle Ups and so on) where I have been steadily, if slowly, improving.

What did you struggle with at first or what are you most proud of for improving?

I want to say I struggled with everything at first and that wouldn’t be untrue. But I suppose I struggled a lot keeping up in metcons and with some of the more complex movements (Snatch and definitely Split Jerk). My proudest moment so far has easily been when I got my first Ring Muscle-Up. To put it in words, I guess that it felt like “nirvana,” or at least like I’d reached some sort of “CrossFit summit.”

I’ve participated in Anti-Gravity Strength, which has definitely helped me on those gymnastics goals and did a year of Alchemy Nutrition Coaching which helped me to improve some lifestyle things. Does private training count as a special program? I’ve done privates since day 1 with someone I think you know. 😉 I was actually too anxious/afraid to start taking classes after Foundations so I began training multiple times a week with you before being (mercifully) kicked into group classes.

Fly free, little bird! How has Crossfit (the training itself, or the community) changed you?

I am not sure how to put it, but I think it gave me a different perspective on some things. What I mean is that whenever I encounter something difficult or challenging outside of the gym, I can remember times when I was on the floor after a hard workout. I can then know that whatever I am currently facing in my daily life, it can’t be as hard as doing some of those workouts. Haha… Does that make sense? I hope that makes sense.

Don’t be intimidated, just show up. Or be intimidated and show up anyway. Sounds simple enough but it takes a lot of courage to do that.

I keep asking that same question myself… just kidding! The same things that I came here for initially I guess. I like the programming. The coaches are constantly providing feedback and guidance. And, in general, it feels more personal when I show up to CFSBK than just being “another member” in some gym.

What qualities are important to you for a future Athlete of the Month?

I am not sure if I can add anything to what other Athletes of the Month have mentioned in the past. Qualities I have always admired in a person are tenacity and determination, both of which have to be renewed on a regular basis.