Use a heavy load (or degree of difficulty for the Ring Row) for the rep range that allows you to move with perfect form, heavier than last week. Keep rest to a minimum, 30-60 seconds between movements.

*Warm up and then perform a set of Front Squats, followed by a set of Ring Rows, heavier than last week. Repeat for 4 work sets of each, resting 30 seconds to a minute between movements.

Use assistance or add weight to the Pull-Ups as appropriate. The Kettelbell Swings should be heavy for 12 reps. Scale the L-Sits to Tucks or Half-Tucks as appropriate, or accumulate 20 seconds in a few sets. 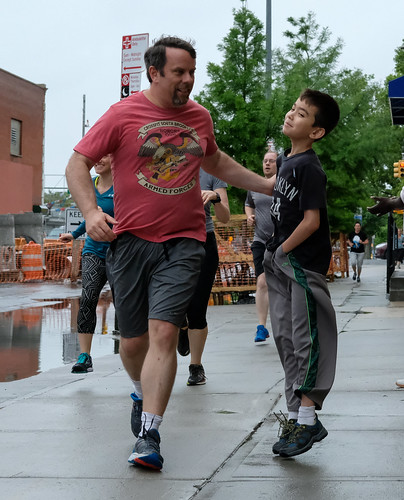 What are some differences between Starting Strength Program and CrossFit group class? Were any a surprise to you?

​Starting Strength made me a lot more hungry, which was dangerous as I put on weight, both fat and muscle, easily. I had to really watch my intake of protein and overall calories so that I was making good of all the strength training I was doing but also not just getting fat. Generally I found I had to think more about diet or I would use SS as an excuse to eat anything and everything.

SS also seems easier in the moment, since you take longer breaks between sets. But, a day after, I found I need a bit more rest than with regular classes​. Sleep, as always, is key.

What are a few of the biggest things you took from or accomplished in SS?

How has Starting Strength affected your capacity in CrossFit group class?

​From a pure ego perspective, I like that when we do power lifts in group class I might be one of the top lifters in a given day. I know we’re only competing against ourselves, but as an overweight, unathletic 45-year-old man it is definitely a boost to feel like you can be one of the stronger people in the room from time to time, especially as I tend to come in “last” in virtually everything else we do, especially the WODs (except the marathon, though I’m not exactly fast there).

​Very supportive. Lots of friends. Feels like a community within a community. Margie and Jeremy are the best. ​

Some of the other over-the-hill dads who do SS and I also created an informal group within the SS community called “Slippery Slope,” because we’re on the slippery slope to death now and SS is one of our last defenses. I think our motto was “Park Slope dads with an overenthusiastic obsession for CrossFit and Phish.” Just writing down that motto made me throw up in my mouth a bit, by the way. Our aim was to be the total opposite of the show “Girls”: boring, ugly, old men doing nothing interesting other than squatting and listening to “Fluffhead.”

Were there any major challenges (physical or mental) that you had to overcome?

Even now when I go heavy on a Squat, I get scared even though I only very rarely miss a lift. But overcoming that mental challenge, the fear, each time is really empowering. ​I also learned that it’s really important to learn how to spot correctly and to ask for a spotter early and often.

_____________________
Yesterday’s Results Board: Rest Day
Fiber Could Save You from the Flu The Outline
Chakera Holcomb Sets Highest All-Time Wilks Score BarBend