The goal is fast and unbroken on each set. The Burpee Box Jump Overs are Rx’d as a jump-out/jump-in Burpee and must be a two-foot take off on the jump. Jump or step down as desired.

The goal is fast and unbroken on each set. TheBurpee Box Jump Overs can be a step-out/step-in Burpee, and stepping over the box is allowed.

Warm up and make a heavy-single Back Squat followed by three more singles at 90% of that load. Goal is no misses and no bailing, but use spotters on all work sets. 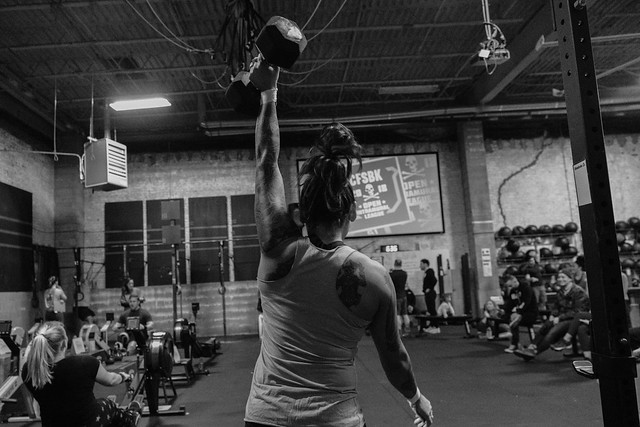 Photos from our first Friday Night Lights event of the season are now up on Flickr. Join us again this Friday night from 5:30 to 8pm as we take on 18.2. Heat sign up info will be on the blog tomorrow!

“You’re gaining weight on purpose?” Looking the inquirer in the eye with a strong “yes” has yielded an interesting array of responses: surprise, confusion, amusement, and, my personal favorite, “of course you would” (said lovingly). Deliberately trying to gain weight is an unusual pursuit in the US, even among active, athletic adults. In this 2-part miniseries—Part I went up last Tuesday—you’ll read the stories of 5 women who are going against the grain, even if they are probably snacking on it right now.

Last week we heard from Erica D., Lorena F., and Coach KHarpz, all of whom are currently at work on massing programs. This week we’ll hear from Francine D. and Coach Lauren “Snickers” Snisky , both of whom have completed massing programs. Let’s rock!

Can you start by telling us a bit about your massing programs? Did you follow a coach’s template or come up with or own (or something else)?

Francine: I first started with a Renaissance Periodization cut and lost 25 lb. Then after 16 weeks of maintenance, I did a reverse diet working my way back up the RP templates to gain weight.

Lauren: I have done the fairly simple, you-gotta-eat-MORE self-made program 2 or 3 times since I started CrossFit 4 years ago. I have some experience in playing with my nutrition and a solid whole-foods foundation, so I felt confident enough to experiment on my own for this purpose. My initial attempt focused on increasing my protein and my protein options. I expanded my diet to included fish and seafood and eventually poultry and meat after about 8 years of a vegetarian diet. I made adjustments along the way based on what felt right as far as my macro nutrient ratios were concerned, and tried I to avoid the absolute forced feed feeling.

Why did you decide to do a massing cycle?

Francine: After hitting and maintaining what my original goal weight, I soon realized that I didn’t feel good at that light weight and with very little body fat. And while I had accomplished the feat of losing a good amount of body fat, I realized I needed to gain more muscle mass—not to be thin and lean.

Lauren: I wanted to get stronger, but it was also for aesthetics. I wanted more visible muscle mass, and I see that as sort of an ongoing work in progress. I will occasionally whine that I “want to get jacked,” and someone will say something like “hey crazy, you are jacked.” I have definitely made some mass gains since starting CrossFit and realizing I needed to eat more overall. It’s all relative to you and your strength and body composition goals.

But initially, a few years ago, I would say I was a bit unaware of how little I was really eating compared to my goal of getting stronger. Coach McDowell asked me one day how many calories I was taking in per day. At the time is was about 1500. He responded with no hesitation that that needed to come up… immediately. And really any increase at that point would have been just to better support my performance and recovery while maintaining current weight. So that’s where I started: eat more and feel the benefits of that, then make another increase with the goal of putting on more muscle mass.

How did it work out? What changes did you notice?

Francine: I massed for 16 weeks and gained 9 lb. I immediately felt better, more vibrant. My programming changed around this time as well. I started working with Coach Ro right before “the massing” began, and the focus was to get stronger with a little bit of hypertrophy work. I felt great immediately.

Lauren: I have noticed changes in both muscle gain and performance. I did do a cutting (fat loss) diet in 2016 and am currently maintaining the weight I’ve put on since last year. When I began Crossfitting I was about 114 lb. I’m currently about 128. 14 pounds gained. Of course this wasn’t all at once. Like I said, I’ve made intentional increases in my diet a couple of times over the past 4 years. I would say my last increase was about 7-8 lb in 2017. Generally over this longer period of gaining weight, my strength has increased significantly. I believe it has helped me push through some strength plateaus. For example, once I was in the 120s, I felt better and saw increases with my Olympic lifts. And I was able to rep out at higher percentages on my Back and Front Squats.

What’s the biggest challenge you encountered?

Francine: I consciously allowed myself to gain weight and train with that goal of strength, but the whole time I kept worrying about getting fat and losing fitness. My mindset was not right. It’s impossible to gain weight without gaining body fat, but I was constantly worried about this aspect. It was also weird at first to watch the scale go up when all my life I’ve stepped on to either see my weight go down or remain the same.

Lauren: Sometimes eating enough is actually a really difficult thing to do. And this is twofold. The first part being, it can just feel like A LOT of food. I already ate 3 servings of protein today. I need more? Yes, yes you do. The second part is more psychological. It’s about keeping the long game in mind. Some body fat will come along with your muscle gains, and that’s been a challenge for me to accept. It still is. But when I think long term, taking on a small amount of body fat and managing that later is well worth the muscle and strength gains.

How did you transition out of massing and back into a maintenance diet/training program?

Francine: This was the hardest part for me. In October, I  started maintaining my weight gain, but I was definitely out of whack and not with my calorie counts. I was just finding it a bit difficult to be a regular person. I was food obsessed during the cut and mass. I just wanted to stop thinking about food. I gained another 4 lb through the holidays, struggling to find my “correct weight.”  I decided to just give my mind and body a break and focus on my performance as I gear up for Masters Nationals Weightlifting Meet in April and am focused on a “healthy eating” approach, looking to maintain scale weight but lose a bit of body fat with some higher volume training and conditioning. The whole program was designed by Coach Ro.

Lauren: I found what I would require calorie-wise to maintain my weight, and I figured out what macro nutrient ratio should make up those calories. Then for me, it was just a matter of finding the portions I needed per meal to meet that new macro requirement. It can take a few days maybe to figure out what works so you don’t continue to gain weight.

Any advice for a women who are considering doing a massing program?

Francine: Our bodies need love, care, and respect. Eat to love your body, first and foremost. Go ahead and gain some weight if your training/fitness goals would be better achieved by adding mass (or by cutting for that matter). Otherwise, just focus on the quality of the food you eat and maintaining a healthy relationship with food and your body.

Lauren: I do think for most, you’ll want to follow an actual program or guideline to be confident you are taking in a good macro-nutrient ratio vs. just eating all the food. There are some different approaches out there, so do what feels right for your goals and training. Ask around, do a little research. Remember these changes, if done well and to last, take time. tTis is why the RP program (that some others have done here) is about 3 months long for a massing phase.

Would you do it again?

Francine: Only if my performance goals required it.

Lauren: Yes, for sure. Maybe a structured program this time to see how that works for me. I get muscle envy. And putting on muscle feels great, plus I know I’ll be stronger for it. I received a couple of compliments not that long ago on how my quads looked larger, and that’s like Christmas to me. It reassured me that the little bit of body fat I’ve put on is worth it, because that body fat can be managed later, and I’ll still have these bigger, stronger quads to show for it.