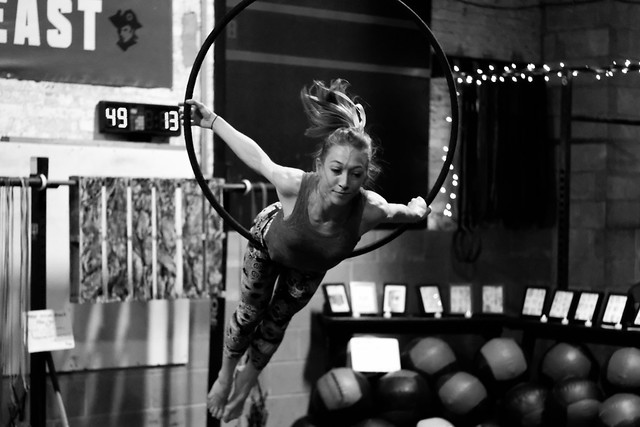 Why would a hoop aerialist like Erica want to gain weight? Read on to find out!

“You’re gaining weight on purpose?” Looking the inquirer in the eye with a strong “yes” has yielded an interesting array of responses: surprise, confusion, amusement, and, my personal favorite, “of course you would” (said lovingly). Deliberately trying to gain weight is an unusual pursuit in the US, even among active, athletic adults. In this 2-part miniseries—Part II will be posted next week—you’ll read the stories of 5 women who are going against the grain, even if they are probably snacking on it right now.

Today we’ll hear from Erica D., Lorena F., and Coach KHarpz, all of whom are currently at work on massing programs…

You have fairly different fitness backgrounds. Can you tell us a bit about where you’re coming from athletically?

Erica: For the last 2 years, I’ve been specializing in bodyweight strength and circus skills. This includes progressions of the basics like Push-Ups, Pull-Ups, and Pistols as well as the more exotic skills like the Human Flag and the Lyra (a.k.a. “The Big Ring”).

Lorena: I started doing CrossFit last year after moving to Brooklyn and finally succumbing to my friend’s pledges of how great it was. Now I’m completely hooked. Before that I did some weight lifting for about 2 years following a training program from a local NYC coach named Maik Wiedenbach. The training consisted of power lifting and dieting. When I started I could only do assisted Push-Pps, and Pull-Ups were a far-away dream. After a year and a half, I was able to unassisted Push-Ups, I was able to do Chin-Ups and was starting to do Pull-Pps.  I also trained Squats, Deadlifts and Bench Presses. Along with workouts, the program also included a diet to lose body fat. I was able to reduce my body fat from 30% to 20% within one year. It was the first time in my life that I physically challenged myself to follow a program to achieve predetermined goals.

Katie: I’ve always been a team sport kind of athlete. My best sport was lacrosse. I started when I was 5 and played club all the way into college (until the great ankle sprain of 2010). I supplemented my off season with track and field and field hockey in high school. Honestly, I’ve tried almost everything, but for whatever reason, I was more skilled if it involved a stick/racket/bat. If it involved me just moving a ball with my hands and feet, I was atrocious. Soccer and basketball are by far my worst sports.

Why did you decide to do a massing program?

Erica: My motivations were twofold—aesthetic and performance. Aesthetically, I would like a more muscular lower body and performance-wise, I’d want to be stronger in all my movements. I was first exposed to the idea after reading RP founder Lori Shaw’s article on it. Even though it made a lot of sense, it took me a while to come around to the idea. Ultimately, what encouraged me to go for it was seeing other women do it and enjoy themselves! There is an awesome Facebook group called “RP Massing Ladies” where a bunch of confident women are getting after it, pushing past discomforts, making jokes about their “power pouches,” and crushing PRs they’d been trying to hit for years. It’s a super uplifting and badass online community. It also really helped to see Katie Harper post about it and know there was someone in my direct community I could turn to with questions if needed.

Lorena: When I started at CFSBK, I immediately started using Beyond the Whiteboard. I love data tracking and analysis, so after a few months of tracking my workouts, BTWB told me that I have a low BMI compared to other women CrossFitters., which in my head automatically meant that to be able to lift more I should weight more. This is a simplistic conclusion, but seems intuitive when you realize that I have long arms and legs with a short body. Anyway, I started reading and hearing stories about other people that did diets to gain weight. As a woman, gaining weight was never associated with something positive. But here I am trying to gain some weight to gain strength.

Katie: To increase my performance as a CrossFit competitor. I tend to fall short in the strength category compared to all of the other advanced athletes out there, so I thought that changing up my diet would give me a big advantage.

Can you tell us about the programs you’re doing?

Erica: I’m following a “massing” template by Renaissance Periodization. The basic idea is that, for about 3 months (or until you gain the desired amount of weight, whichever comes first), you aim to gain between 0.25 and 1 lb per week of mass. At the end of your gain period, you might expect 25% of that tissue to be muscle and the rest to be fat. After a period of maintenance, you can begin cutting to remove any unwanted fat, eventually leaving you with a more muscular physique and stronger body than what you started with.

Lorena: Nowadays I do group classes 5-6  times a week, and I try to do 1 hour of AR twice a week. I took advantage of the LFPB Challenge at the gym and decided to follow a diet to gain strength, which requires gaining some weight. This makes me somewhat uncomfortable, probably because of years of being sold on the idea that “thin is pretty,” which women are constantly bombarded with.

Katie: I’ve been following an RP template that Keith set up for me. It’s actually based off of a maintenance template (with the goal to keep weight the same with more specific macro balance/timing), but I set my weight as 135 pounds (even though I was 132 lb when I started). The goal for me was to gain a modest amount of lean mass (3-5 lb) and see how it affected my performance. I didn’t want to do anything too drastic so close to the Open. But my intention is to kick it into high gear and go on a massing template in the offseason since things are going well for me. By the CrossFit Open in 2019, I want to be a lean 140 lb brick house

What kind of progress have you seen so far?

Erica: Performance-wise, I’ve seen some huge improvements even though it’s only been about 3 weeks! My first few days of the program, I hit 8 strict Chin-Ups (a number I’d been after for many years), a 20# weighted chin-up, and 14 strict Push-Ups. Earlier this week, I hit 9+ consecutive Pistols on each leg (up from a struggling ~4) and PR-ed my Heel Hang from 14 seconds (up from 12). It’s fairly early in the mass, so the performance improvements are more likely to be from the extra food aiding recovery than muscle, but either way, I’m thrilled.

Katie: Progress has been made! I weighed in at 136 (with clothes on) last Monday. Aesthetically, I have definitely noticed that I have A LITTLE more muscle in my legs, but it’s hard to tell with the rest of me. When I’m really strict on the weekends my abs are poppin’ though, which is fabulous. Overall, I have a lot more energy on my long days at the gym, and my performance has improved. I used to feel like I was going to fall asleep mid-workout at least three times a week, and I know that most of the time, it’s not sleep related. I have been getting 7-7.5 on average weekly these days.

Have you altered your training to fit your diet?

Erica: Definitely. I’m doing a lot more volume on both my upper and lower body, but especially lower. I’ve also shifted my rep schemes from 1-2 reps of very high-effort progression steps to sets of 8-12 reps of moderate effort. Also been experimenting with Hip Thrusts for glutes, as I’ve had a hard time finding a good calisthenics glute exercise I like.

Lorena: My program includes tracking macros, sleeping 8 hours, and taking some supplements such as omega-3s, magnesium and vitamin D. From the beginning, I was surprised by the proportion of carbs on my diet. Before I was eating the same amount of proteins and carbs and controlling my calories to make sure I didn’t gain weight. Now I’m eating much more carbs and I can feel the difference on my performance. I don’t feel tired, and I think I recover much faster from workouts.

Katie: Quite the opposite, actually. I needed to match my diet to fit my training volume. I was definitely under-eating, which was affecting my energy levels.

What kind of challenges have you encountered so far?

Erica: The biggest challenge I’ve encountered to date has been managing my gain rate. The first week, I actually lost weight and the second week I gained a bit too fast. The scale is unfortunately an imperfect measurement tool (you fluctuate throughout the week due to water and other stuff), and it’s sometimes hard to make a call on how to tweak things as you go.

Lorena: I have been on this diet for 5 weeks, and so far, I haven’t gained weight. I must confess that gaining weight makes me feel anxious. Every time I weight myself I have to consciously think that an increase in weight is actually a good thing. I’m very good at tracking macros and going to the gym even when I’m not in the mood. The change in my mindset might be the most challenging thing about it so far.

Katie: As expected, compliance. I’m a social lady, so sometimes I want to go out, have fun, and eat whatever I want. I think that’s fine. I’ve set realistic expectations for myself, and I am pretty relaxed about my intake on my weekly rest day and weekends. So if I’m being honest with myself, I find that I’m compliant about 4.5 out of 7 days. And I think that’s good for now. But, yikes, is it hard to find time to cook for myself with all of the stuff I have going on these days. I have created a few menus for myself to make the task as easy and mindless as possible. It’s a bit monotonous, though. Sometimes, I feel like all I do on Monday through Friday is wakeup, work, work out, cook, sleep, and repeat.

What do you ultimately hope to gain from your massing program?

Erica: I’d like to get stronger in all of my movements, but in particular the push and pull from my shoulders with Skin-the-Cats and L-Sits would be amazing.

Lorena: Because I’m not a professional or even recreational athlete, and I’m not training to any competition, it might seem (to me) that I don’t have a clear goal to achieve. My ultimate goal would be to gain mass, without gaining fat and gaining strength to be able to lift more weight. I’m planning on using the Open and Benchmark WODS to track my performance, and listening to my body to assess how I feel. I think ultimately the main goal is always to be healthier.

Katie: A one way ticket to Regionals baby, AWW YEAH! (maybe not this year, but hopefully one day if I keep this gainz train going!)

Check back next Tuesday for Part II, when we’ll hear about Francine D. and Coach Lauren’s massing experiences!

_____________________
Yesterday’s Results Board: Push Press | Dumbbell “DT”
Set a Goal for Each Training Session Catalyst Athletics
The Most Unusual Menus from Libraries Around the World Atlas Obscura