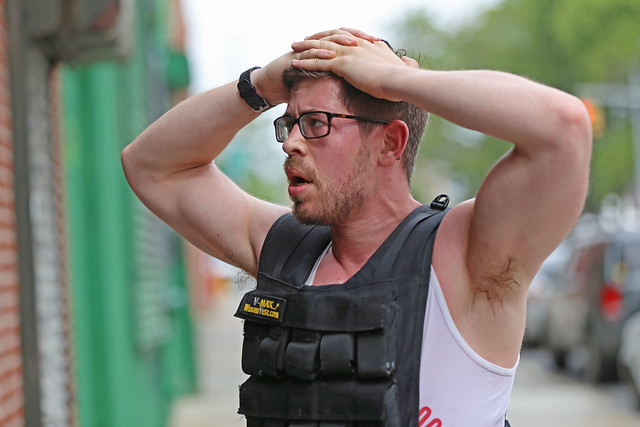 This month we’ll finally answer one of the oldest questions around CFSBK: ”Who the f%ck is Dan L.?” The 6am folks know him well, the 7am folks might recognize him as the guy who’s often finished with the workout for 5 minutes already while almost everyone else is getting into the last round. The rest of you might know him only by his numbers on the big results board, where many have exclaimed the previously mentioned query. Many others have insisted that Management made him up in an effort to coerce members into better performance. Rest assured, he does exist and is actually a really nice guy.

Fox: Congrats, Dan! It seems to be about time for you to be here. Let’s start with when and how you first found CrossFit.

Dan L.: Thanks very much! I started CrossFit in February of 2009. I’d been doing triathlons and was a member of the Brooklyn Tri Club, which is where I first heard of CrossFit. As I remember it, CFSBK was offering some sort of class for BK Tri members, and we were encouraged to inquire about it. I called the number, which was apparently David’s cell phone, and left a message. David soon returned my call and the rest is history. I did Foundations that month and have been pretty consistent ever since. By the way, Foundations felt like it was a LOT of classes back then. We had a lot of people in that group, too—Charlotte K., Peter H., and Chris J., to name a few.

Fox: Haha! Foundations used to take a month to get through and wasn’t capped back then. It obviously did it’s job, though. Petey Hopps trained with us until he moved to Wisconsin last year, Charlotte still makes cameos every so often, and Chris J. has been coming regularly since then as well. What were your first impressions of CrossFit, and why did you stick around?

Dan L.: I’d been looking to diversify my training a bit and was growing bored with triathlons. I had never really done any weight training beyond the usual 3 sets of 10 Bench Presses, where I’d eventually and predictably fail and get frustrated, at which point I’d stop doing it for a while before coming back around to the same pattern. With CrossFit I started to see results pretty quickly. I got stronger, and I looked and felt it. I do remember thinking that there was no way I could do all the training I needed in an hour, though, and that I’d have to do lots of extra stuff on top of class. I quickly realized I was wrong. As for the space itself, the Lyceum was a “special” place—special in that the bathrooms leaked, the roof leaked, it was COLD in the winter, and it was always pretty dirty despite what I’m sure were David’s best efforts to keep it clean. My first time in there, I walked in on a class that was about 30 seconds into “Fran.” I was so worried because I assumed they’d been doing that for the whole hour! There was no way I could keep up with that! As I moved away from doing triathlons, I became more drawn to CrossFit. The group dynamic really allows me to push myself harder than I otherwise would. There’s something new every day, and I don’t have to think about what I’m going to do. Like most people, I saw results pretty quickly early on but am still improving today, even if it’s slowly.

Fox: Ah, the Brooklyn Lyceum. I have my own “first sighting” story and always love hearing others. It’s a wonder people stayed. Have you always been a 6am guy?

Dan L.: Pretty much. When I first started there were only a handful of classes to attend, so I went at different times. I think there were only morning classes a few days a week, so I’d attend those on my way to work and make the evening classes on the other days when there were none in the morning. Since CFSBK moved to Degraw Street, I’ve been a 6am regular but have made a few appearances in the evening. The place feels so different compared to the morning, totally different energy for me. I just can’t drum up the mojo to train hard after a long work day.

Fox: I know you travel a lot for work. Do you visit other affiliates to get your training in when you’re out of town?

Dan L.: I do, but I almost always just drop in and take a class. I like getting the experience of a class and have noticed that standards have gotten better across the board. I trained for a while at Alexandria CrossFit (now Outlaw CrossFit) in late 2009 when I lived there for a bit, and even back then, they used many of the same practices (like labeling equipment, starting classes on exactly on time, and using timestamps) that make CFSBK a great place to train. That’s something I see more and more when I travel. SBK has certainly evolved over the past 8+ years that I’ve been a member, but it feels the same in key ways. The equipment has gotten better, classes are even better run, and you can tell there’s a concerted effort to provide the best experience possible. The true spirit of the gym hasn’t changed, though, it’s just more grown up.

Fox: Glad to hear we’re all getting better! I really enjoy taking classes at other affiliates, too. What do you do for work that has you on the road?

Dan L.: I work in tech and recently co-founded a company called Vericred, which is why I’m currently traveling pretty often. We provide health insurance data to companies that need it in a simplified manner. I’m on the road regularly for face-to-face meetings with clients to learn what they like about our product and what changes they’d like to see.

Fox: Where’d you grow up?

Dan L.: I grew up in Madison, Connecticut, just southeast of New Haven. My folks are still there. I’m the oldest of 4 siblings: I have one sister who lives in Oakland, another sister who lives in Boston, and my brother, Ethan, is here in Brooklyn. My brother did Foundations and was actually coming to CFSBK for a while, but he isn’t really a morning person. He’s been threatening to come back.

Fox: Did you play any sports as a kid in CT?

Dan L .: I wrestled in middle and high school. With wrestling, I can see how it carries over to CrossFit in a way. In a match, much like during “Fran,” there’s nowhere to hide. That taught me how to push myself and ask the question, “How much do I want this?” Also like CrossFit, there’s a team or group dynamic but really it’s an individual sport where you control your results. I played baseball in high school, too, but was more of a decent hitter who played right field.

Fox: Where can you be found when you’re not crushing workouts at 6am or working?

Dan L.: My girlfriend Laura and I just got a puppy, Burrito, who takes up lots of time but is totally worth it. I was pretty indifferent as to what type of dog to get (I grew up with hamsters and cats), but Laura really wanted a Corgi (here’s a bonus link to Corgi’s being adorable), so his name sorta makes sense. We’re currently looking for a daycare for him and will happily take reviews. I hope we can get him into a solid first grade when the time comes. I also like to travel. We regularly visit Ottawa, where Laura’s grew up, and recently had amazing trips to Peru and Mexico City.

Fox: Love the puppy’s name, and can’t wait to meet him! Were you always good at CrossFit? What’s your kryptonite?

Dan L.: Ha! I’ve had my struggles and still do. Early on I realized that I just wasn’t strong enough to be good at any barbell stuff. I could hold my own with bodyweight movements, but a heavy barbell would crush me. I tackled that by doing a pure strength phase for a few months and drank a gallon of milk a day. I put on 30lbs, and even though some of it was a fat, I’ve been able to hold on to the strength I built during that period while losing the extra fluff. My Olympic lifting wasn’t any good, to be honest it was a disaster, when I first started. I literally fell on my ass on my first ever Overhead Squat. Now I’m working on things like mobility, which is a slow process. Handstand Push-Ups are a weakness, as are high-volume Wall Balls or any high volume Squat workout. I’ll generally spend a few minutes before and/or after class working on some stuff but find the programming here to be pretty comprehensive. I’ve been able to improve consistently over time just by showing up and working hard. I did a Strength Cycle (now Starting Strength Program) here way back, but all of the other specialty classes are in the evenings, so I haven’t done any.

Fox: What keeps you coming back to CFSBK to train?

Dan L.: It’s a fun and effective place to train, and I’ve developed a group of good friends here that help keep each other honest. If someone isn’t in for a few days the texts will start flying. Honestly, seeing the gym evolve and having been a part of it through that process, I feel a real connection to it. I identify myself with the gym in a way.

Fox: Great stuff, Dan. Thanks again for coming in the evening to chat with me. Last question: What should we look for in a future Athlete of the Month?

Dan L.: Someone who works hard to be better but compares her or himself to themselves, not to professional athletes. Someone who wants to be part of the larger community and makes an effort to get to know people, even when you’re not partnered up with them. Lastly, someone who adds more to the community than their personal accomplishments.