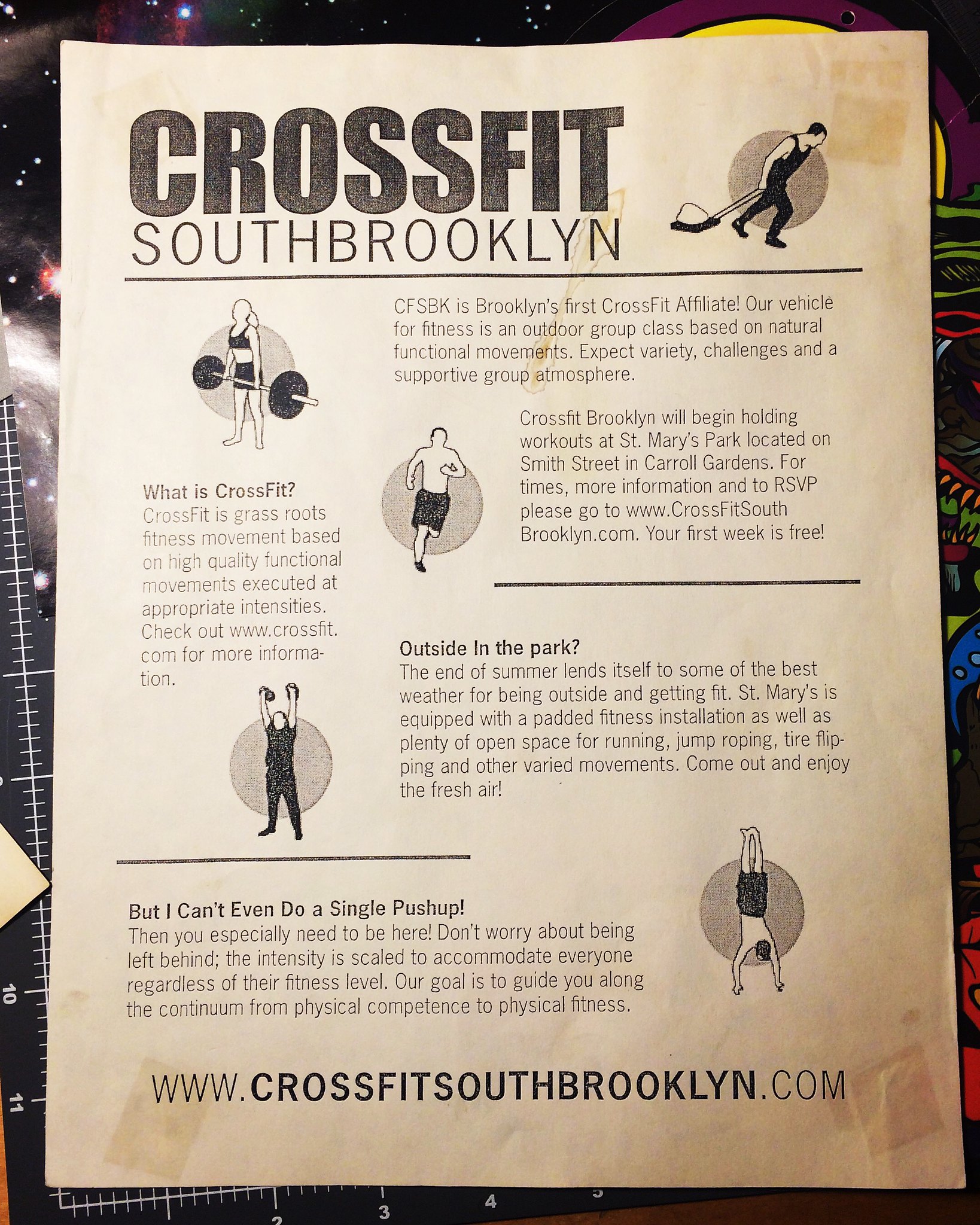 10 years ago today, I taught the very first CFSBK group class at St. Mary’s playground on Smith Street between Nelson and Luquer. By that point, the idea of starting the gym had been brewing inside me for many years and I was both excited and terrified to be finally doing it “for real.” The park was perfect. It was a few blocks from where I was living. It had two pull-up bars, a dip bar, some monkey bars, and a rubber-coated floor. There were two basketball courts and plenty of space to run around. At the time I had been working as a personal trainer at Equinox in Columbus Circle and one of my clients who I had become very close with said he and a friend would make the trek out from the UWS for the inaugural class. I wanted it to be PERFECT. This was going to be the beginning of what I wanted my life’s work to be and I wanted to do it right.

I got my few pieces of equipment together and showed up early to set up. However, much to my horror, and for the first time I’d ever seen, the park was closed! There is about a 20′ high fence surrounding the whole park, and it was padlocked on both entrances. My friends were on their way already and I was bugging out. I considered running to a hardware store and getting bolt cutters or climbing the fence… to, I guess just be stuck inside there alone? There was no way around it: we just wouldn’t be able to get inside. Of course, when Jamie and Christina got there, they were extremely gracious about it, and I just ran the workout on the sidewalk next to the park. I couldn’t do what I planned, so I made up an interval workout composed of bodyweight rows (by attaching the rings to a beam on the fence), running, and thrusters with 2 PVCs I brought for the warm-up. This is actually why the blog post for 9.19.07 is entitled “SNAFU” (“Situation Normal All Fucked Up”). It was an ominous and humbling first day for me, but it was only “day one,” and I figured it could only get better from there.

While a LOT has changed since then, I think the “feel” of that first class would still be recognizable to any CFSBKer reading this today. There are a few things which are fundamentally part of our gym’s DNA, the most important of which is that it has always been a labor of love. Ten years later, that love is stronger than ever thanks to all the (mind-blowingly) incredible people who comprise our community and staff. There are an overwhelming amount of things to say, people to thank, and reflections that I have about all this, but I’ll just leave it as a simple THANK YOU to everyone who jumped on board and gave a part or all of themselves to this journey. I figure it can only get better from here.

Hey! We’re having a party to celebrate this.. you should come:

Finally, if you missed it, check out 10 Things I’ve Learned in Ten Years of Owning a CrossFit Gym on insidetheaffiliate.com.

Hey, did you like the video feature on new standardized warm up movements we did yesterday? We’d like to do more stuff like that and need your help. So, from time to time, we’ll be asking you for questions that we can address in short videos. Today is one of those times! Leave a CrossFit-related question that we can address in a short video in today’s comments. One of our illustrious coaches may respond in a future video!