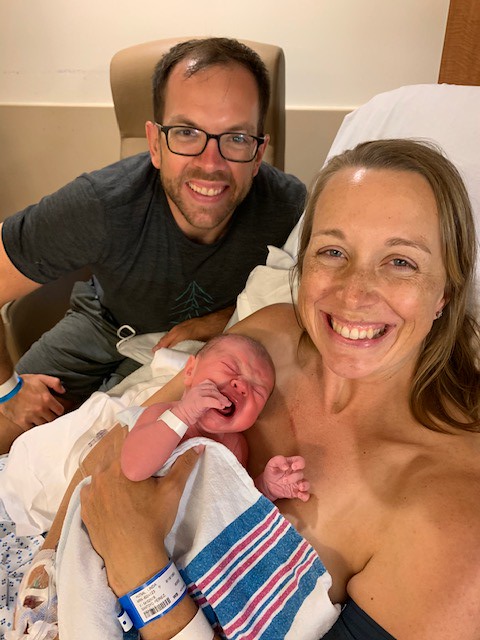 “We are thrilled to say that Lucas Dolan Hutsal arrived on Saturday morning, 7/11 at 3:12am, weighing in at 7lbs 14ozs. We are all doing well and happy to be at home!”
Congratulations to the whole family! Linda and Steve have been doing our CFSBK @ Home programming through the pregnancy and we’re so happy to see this fit family add a 4th member!

Updates and Musings on State Closure

Last week several gyms filed a class action lawsuit against New York State in response to fitness centers being withheld from phase 4 reopening plans. Many of these gyms were from regions north of the city who had entered phase 4 however along with indoor malls and movie theaters were told shortly before their planned reopenings that the city would require their businesses to remain closed indefinitely. It appears the reason for removing our businesses from phase 4 is due to concerns about filtration abilities of HVAC systems. Here’s our take:

I think the fitness industry needs to be smart, but not brash about the situation. Many gyms owners I’ve talked to around the country argue that there’s “no evidence” to suggest gyms are significant vectors for spreading the virus, sometimes pointing to this study from Norway with a sample size of 3,754 participants, half of whom were allowed to go back to the gym and others who were told to remain home. The conclusion of the study showed that there was not an increased infection rate of gym goers, however Norway and the United States are not analogs and given how much of an outlier the US has been with infection rates, I think the study’s applicability to our situation is promising but limited. It stands to argue that with a virus who’s primary means of transmission is respiratory droplets, indoor training environments are a unique concern. However way more nuance is needed in assessing the risks given the specifics of the training environment and style as well what mitigation efforts have been put in place. The fitness industry is not a monolith, a second floor equinox with circulated air and a gym like our own with roll-up gates and no AC system are two very different situations. I’m also frustrated in the lack of rational going into some of the reopening decisions. For example indoor gymnastics, basketball and baseball were all included in phase 3 as well as physical therapy, chiropractic care and massage therapy. If these industries have been allowed to reopen can’t appointment based personal training and masked small group training with no recirculated air return? Furthermore many businesses that use HVAC systems like barbershops, nail salons and super markets have been allowed to open without concern or requirement for additional filtration systems.

Additionally, we have not been given any metrics or timeline to suggest when we would be able to reopen. Being in phase 4 at least gave us some reasonable timeline to plan around, but no additional guidance has been given since we were removed from phase 4 and don’t know if that means a few extra days, weeks or months that we should be preparing for. If gyms are mandated to be closed indefinitely, rent abatement and extension of federal unemployment benefits need to be implemented in order to keep small businesses and people afloat. The numbers in the north east have been promising and we hope that we can open our doors sooner than later.

We’re taking covid seriously. We understand that we have a unique and powerful responsibility to keep our members and the greater community we live in safe. We believe in science and that masks and distancing are necessary mitigation efforts to keep covid numbers under control. But we also want answers, transparency and more economic relief from our government if we’re to continue to remain closed.