Warm up to a single heavy set of 3 reps at tempo, slightly heavier than last week. This should be done with no misses and perfect form. The goal is to build success at moving heavy weights with near perfect form, so this should not be a true 3RM.

Add a few lbs to last week (or use about 35% of today’s heavy 3 deadlift). Prioritize good movement over load.

Glen Pendlay explains the Pendlay Row: Notice that the barbel starts on the floor for each rep in these. There’s some momentum and speed off the floor yet Max’s back remains neutral and his torso remains near horizontal. If you can get into this position then perform them like this!

Barbell Row Demo: If lack of flexibility (most likely in the hamstrings) prevents you from maintaining a neutral spine with a horizontal torso and very little knee bend, then perform them like in this video. Note that the torso is still near horizontal and not “ratcheting up” with each rep. Due to grip fatigue you may have to use a lighter load for this variation. 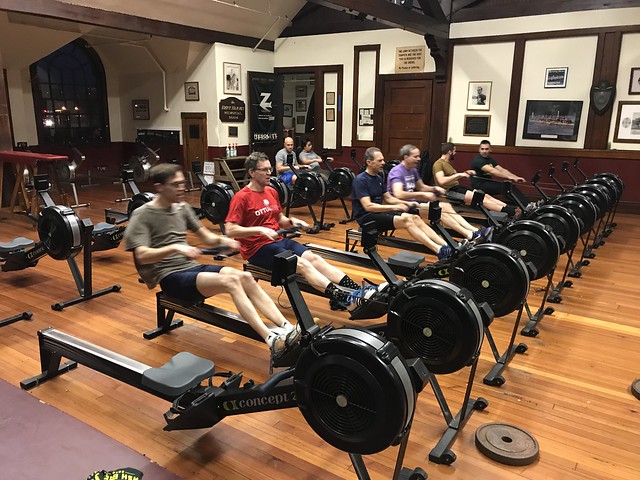 For the 11th year in a row, the CrossFit South Brooklyn Indoor Rowing Team is mounting a CRASH-Bs campaign! Held in Boston each year, CRASH-Bs is the premier indoor rowing championship.

Coach Nick will lead a crew of CRASH-Beasts to the 2020 CRASH-B Sprints this Sunday, March 1st, 2020 at Boston University’s Agganis Arena. For the last 14 weeks, Coach Nick has guided the team through a program based on his training regimen when he was competing at the Olympic level.

Here are the intrepid CRASH-Beasts who break the erg chain this weekend:

Kick some ass, CRASH-Beasts. Let’s show our team some love in the comments.