After a thorough warm up, work up to a heavy set of 10 touch-and-go reps. Rest as needed between sets, around 2-3 minutes.

The Hang Power Clean should be light-medium heavy for you and unbroken throughout on the fast end, and the box should be a height you can move through comfortably. 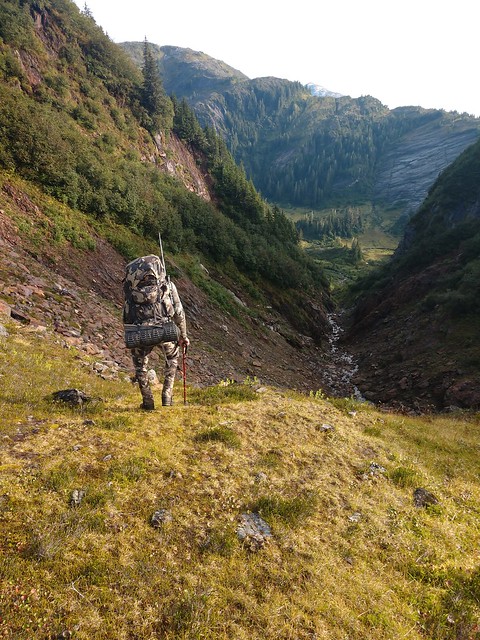 CrossFit for the Hunter-Gatherer

Editor’s Note: CFSBK member Adam Kolesar recently did extensive training with Coach Brett to prepare for a mountain hunting expedition, and here he shares his thoughts on the ethics of game hunting and how CrossFit helped to prepare him for a grueling journey with lots of equipment. Thanks, Adam!

One of the reasons I joined CrossFit South Brooklyn was the opportunity to build fitness in pursuit of fish and game. I have a personal goal of reducing or eliminating my family’s dependence on factory-farmed meat. My connection with what I eat is a throwback to my general discomfort with technology. I’ve fished all my life, but hunting is something I took up about 15 years ago. Initially, CrossFit allowed me to successfully deep drop fish 250 miles due east of Montauk. While surrounded by folks with electric reels, I used all those Burpees and Push-Ups to muscle 30-pound tilefish and hake from 900 feet of water.

Developing a sound base of fitness would become invaluable on a recent trip to Alaska to hunt the Rocky Mountain Goat. Alaska has very strict laws against “wanton waste.” Every hunter must abide by this code. Game wardens actually conduct flyovers and prosecute offenders. If things don’t add up, they levy fines in the tens of thousands of dollars, confiscate the “trophy” (antlers, hides, etc.), and allocate meat to homeless shelters. A major aspect of my CrossFit training was developing the endurance to reach the mountain tops and then pack out the goat and preserve the meat. The outfitter and I also had the goal of taking only an older billy goat who perhaps faced starvation with the impending winter in the mountains. All of the above efforts support the responsible management of the herd based on biologists’ census of a given species.

The demands of this hunt would require me to develop a unique set of skills based on the task of stalking a wild goat in its alpine habitat. Success or failure at this task is basically contingent on one’s fitness level. I presented Coach Brett with the proposal of helping to transform a middle-aged urban flatlander into at least a competent mountain hunter. I’ve been at CrossFit South Brooklyn for about two-and-a-half years. Coach Brett was familiar with my strengths and (many) weaknesses. Mountain hunting is a multi-discipline pursuit. In chasing mountain goats, one must climb above their quarry, since goats don’t perceive a threat from the mountain top. In order to reach the goats, steep climbing with a loaded pack through a rainforest choked with alders and devil’s club (a stinging thorny plant) is the order of the day. This sequence of events is repeated over several days and nights with the ultimate reward resulting in a pack weighing at or over a 100 lb for the return to base camp. Brett and I agreed to meet about every 6 weeks starting in February and slowly develop the specifics needed for August’s hunt. We started modestly with single-leg and -arm stabilization and strengthening work. Like many middle-aged people, my joint mobility and range of motion was (and still is) terrible.

The program would have an “A” day (conditioning) and a “B” day (strength). The first cycle was spent improving single-leg strength with an emphasis on ankle mobility. We also tackled shoulder girdle stabilization and range of motion. Given the demands of climbing with a pack (often on unstable terrain) the potential for injury is significant. Underlying these specific mountain-training targets was CrossFit’s emphasis on core strength. I can’t over emphasize how important core strength was to managing a heavy pack over uneven, unstable terrain in a climb (or descent) through the alders and devil’s club.

The next phase of training would build endurance in tasks simulating the elements of a mountain backpack hunt. The “A” day featured an AMRAP in a 30 minute session moving with intention between tasks. Things like rowing, sled pulls, walking lunges, and weighted overhead carry. The “B” day featured Squats, Pull-Ups, and Single-Arm Rows. A major concern of the hunt was the capacity to make an accurate shot in the event we needed to “make a play” in the mountains to intercept a goat. The thought of being winded and making an accurate shot on unstable terrain in an awkward position plagued my thoughts.

The final phase of training would address that concern. Both “A” and “B” days were devoted to an intense, rapid progression of tasks (usually about 4 exercises) with no rest between tasks. There would be equal intervals of work and rest between the 3 exercise complexes. An example of one complex would be a 100-foot Harness Pull followed by Kettlebell Swings followed by Slam Balls, and finishing with Push-Ups. I would work on returning my heart rate and breathing to baseline as quickly as possible. The added bonus of this phase of training was developing relative comfort with an elevated heart rate for an extended period of time without “blowing up.”

I did my best to apply this training in backpack training hikes up an abandoned black diamond ski mountain near our place in the Adirondacks. I carefully added weight to my pack so as not to suffer an injury prior to the hunt. These hikes also allowed me to “shake out” my gear in a closer approximation of what I would face in Southeast Alaska. In hindsight, adding a bit more weight might not have been a bad idea. The bag was indeed heavier in real hunting when food and spike (remote) camp gear was included.

Our urban mountain training program indeed prepared me for a successful Alaskan hunt. There was no way on earth I could’ve completed this journey without the support of Brett and the CFSBK community. Now I’ll have something really interesting to contribute to the annual community potluck dinner!