Use a “faster up-slower down” tempo. Heavier than last week. 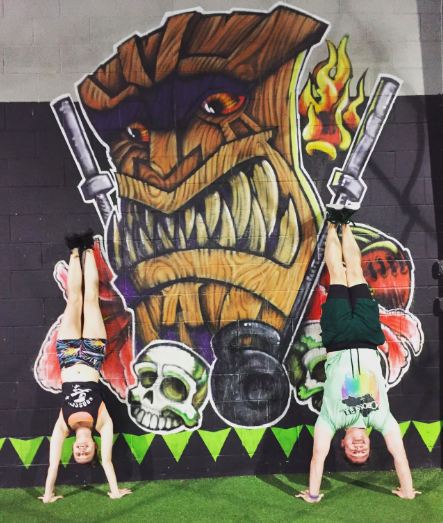 When and why did you begin your journey at CrossFit South Brooklyn? What were you doing fitness-wise prior to that?

In the fall of 2015, I found myself in a job with a heinous, bullying boss named Richard. The situation was new for me and I didn’t yet have the tools to cope. Eventually I reached a threshold of toxic stres,s and it led me to both therapy and Crossfit (thanks, Richard!). My boyfriend at the time asked if I would try CFSBK with him, and I was so desperate for anything different that I jumped in headfirst. All I knew was that what I was doing wasn’t working. Man, I am so grateful that I walked into this gym.

We’re glad you decided to give it a shot, too! What were your initial impressions of CFSBK’s environment?

I’ve always been small and skinny—”blessed”—with a fast metabolism that for years made me fearful of regular exercise and potential weight loss. In grad school, with the long hours, stress and boredom of eating out I was chronically below a healthy weight. More significantly it gave me a fixed mindset about my body: its appearance and abilities. So I was pretty intimidated to walk into CFSBK; I think part of me was expecting everyone to question why someone who looked like me was there at all. Instead I felt remarkably unremarkable. I was immediately treated as though I belonged here. Amazingly I also ran into two former classmates my first day: Linda Hutsal from highschool and Mary Mazilo from college!

What a small world! What’s your “athletic” background?

I did gymnastics pretty seriously until around middle school. The uneven bars were my favorite! Then I did pretty much nothing until learning yoga in college. I’ve never considered myself an “athlete,” so I’m pretty stoked to be Athlete of the Month. It feels like it is sealing the deal on a huge shift in mindset for me.

That’s so awesome to hear. We strive to create a safe, effective, inclusive, and (hopefully) fun training environment for every level of “athlete.” Where did you grow up?

I grew up in South Jersey with my parents and older brother, Dave, who now lives in Hawaii. He was always very athletic, and the story I told myself was that I was the opposite. Interestingly we both started doing CrossFit separately at around the same time, miles away from each other, and only found out after the fact! Now it’s a major shared interest and we love to swap tips, look at lifting videos, and go to class together during visits.

As evidenced by the awesome (and CrossFit requisite) handstand pic above. How’d you end up in Brooklyn?

I am a set designer for film and television, so I came here for work, really. Manhattan and Queens don’t suit my temperament but Brooklyn feels like home.

How do you spend your time outside the gym?

I have been involved in my union working on harassment policy, paid leave, and open communication between the Locals. I’m working on starting an outreach program to expose underrepresented young people to the jobs in our industry. And, I also love hanging out with my large dog and little cat, who are best buds.

What are your hobbies other than CrossFit?

The CFSBK Art Show was actually a big mover in my artistic life. I developed a perfectionist mindset and anyone who suffers from that knows that it is debilitating, especially for creativity. I had mostly stopped art for my own pleasure until I decided to show some work at the Art Show, and I have participated every year since! The show has helped motivate me to just make art and share it, without attaching judgement to it.

I also learned how to surf a few years ago because the idea terrified me. All of these things are linked together with my general growth since I started at CFSBK.

If you could place an ad in the NYC subway system, or on a huge billboard in Brooklyn that people would see every day, what would it say?

What were your initial goals in the gym, and what are you working on now? What did you struggle with at first or what are you most proud of for improving? And how has CrossFit changed you?

As I said, I grew up with a fixed mindset and I quickly discovered in therapy that this was a major factor contributing to my stress at work. I didn’t realize it at the time, but joining CFSBK would be the active component to my work in therapy! My biggest struggle was feeling like I had to be perfect at something before even doing it, especially in front of others. Every time I went to a CrossFit class, I was out of my element, doing something I’d never done before, in front of other people. And nothing bad happened! And then you do it again. CFSBK has helped me to foster a growth mindset and to change the way I see myself and my abilities. Getting strong and fit and doing fun stuff with my friends who are also striving for betterment is icing on the cake.

“And then you do it again” pretty well sums of the process for improvement in any area. Nice job! Do you participate in any special programs at CFSBK?

Currently addicted to Anti-Gravity Strength! Also big shout out to Coach Keith for personal training and remote programming to help me with more focused goals.

Something that so many of us struggle trying to do a little more of. Thanks for the inspiration! What keeps you coming back to CFSBK?

I mean, after everything I’ve just told you, isn’t it obvious?

Ha! I suppose it is. Last question then… what qualities are important to you for a future Athlete of the Month?

Striving courageously for personal betterment and lifting others up in the process with positivity, passion and joy.