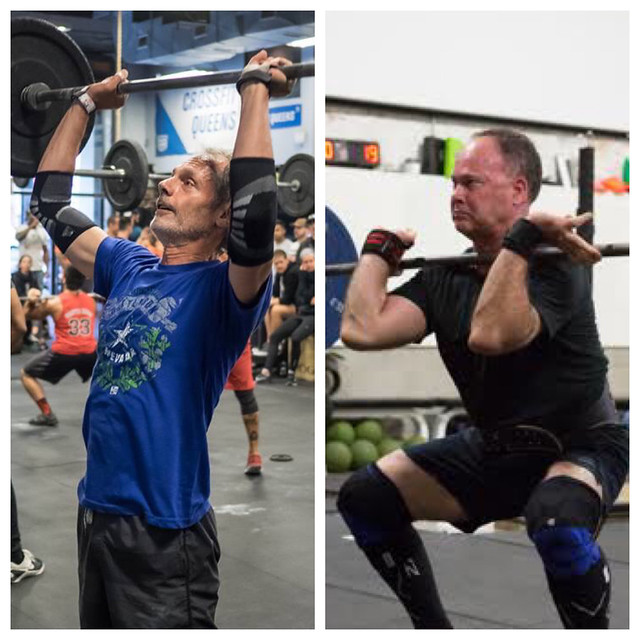 CFSBK masters athletes Dan Baldini and Bob Semmens recently competed in both the CrossFit Open and the Age Group Online Qualifier, the next step qualifying teens and masters take on their way to the CrossFit Games. We asked them to tell us about their experiences, and today we’re happy to share them with the community!

How did you do this year?

What are your athletic backgrounds? Have you competed in the past?

Dan: I was on the swim team in college, and after that I ran for about 10 years, then I got into triathlons and I did that for about 15 years but I found the training got pretty tedious. I’ve been doing CrossFit on and off now for about 14 years, basically since the first one opened in New York (CrossFit NYC). Objectively I’m not that great a CrossFitter. It’s just that if you keep at it long enough the competition falls away. This year only about 2,700 men did the Open in my age group, so the odds of making it to the AGOQ weren’t that bad. I imagine most folks my age have moved on to things that don’t make you feel like you’re about to have a heart attack.  For this reason there isn’t much of a masters community, at least in New York. Bob is the only CrossFitter I know in New York over 55.

Bob: I played varsity football, wrestling, and track & field in high school as well as competing at high school powerlifting. I hoped to play college football but incurred a serious knee injury as a senior in high school, which cut short my football career.I trained in martial arts for 30 years in Tae-kwon do (Black Belt), Brazilian Jiu-Jitsu (Purple Belt) and Judo (Brown Belt). I won a gold medal in the senior division at the Pan American BJJ championships and two gold medals in the senior division at the New York BJJ Open.I have completed 5 triathlons, one marathon, and numerous 10Ks. I began CrossFit training in 2006 at CFSBK to supplement my martial arts training and went “full time” in CrossFit training in 2009 due to some physical ailments. I did a CFL1 cert at CFSBK in 2009. I still fondly remember CFSBK at the Lyceum. The first WOD I remember there was “Fran,” where David asked me to use rings instead of a bar for the Pull-Ups as bar space was limited. This is my fifth AGOQ.  I have finished as high as 35th and as low as 177th.

What were your approaches to the Online Qualifier workouts? Did you do them solo or in a team environment?

Dan: This was the seventh time I’ve done the Open and the first time I’ve made it to the AGOQ.  I moved up an age group so I figured this year was my chance to do well and I mostly prepared on my own following CompTrain Masters programming.  When it came to the workouts Bob and I did them together at CFSBK from Friday morning through Monday morning.  This was much more fun than doing them solo and I probably did better as a result.

Bob: Dan and I did them together, although in a different order. I would judge and record Dan and then he would do the same for me.

What is it like to compete as a master’s athlete?

Dan: I enjoy CrossFit competitions. Except for the Open and the occasional masters competition, I’m up against folks who are a lot younger and better than me. I think knowing that there’s no way I’ll be competitive relieves any anxiety and I get a sense of accomplishment just finishing, although I prefer not to come in last. Of course I like being fit, but it’s the competitions that keep me training hard throughout the year.

Bob: There is not really much community in the master’s division. It’s all online! I wish there were some community. Our division had about 3000 competitors, so I was really lucky to find Dan to work with in the AGOQ. He and I had competed in some other master’s events. Unfortunately, most of those master’s events have gone away.  I have a coach who programs my training, so I don’t do many classes at CFSBK anymore just Open Gym. It is difficult to train every day without company. Aiming to compete well in the Open and AGOQ each year helps keep me motivated to train hard.