Start light and build to a medium-heavy load. 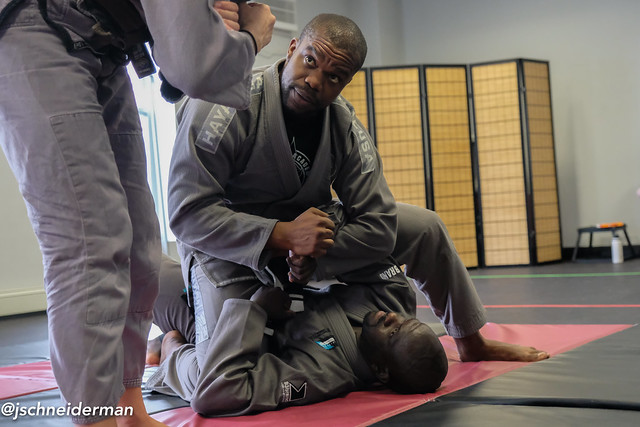 Brazilian jiu jitsu (BJJ) is a full-contact grappling style that prioritizes strategy over brute force. Literally translating to the “soft” or “pliable” (jiu) “style” (jitsu), it is often thought of as the chess of martial arts. BJJ is, at its core, a self-defense system that employs positional advantages, joint locks, and chokes to defend against an opponent or attacker in an assertive and elegant manner. You needn’t be stronger than your opponent to subdue them, which makes BJJ one of the most practical and effective martial arts for all ages and sizes. There is no striking in Brazilian jiu-jitsu. This is a submission grappling art based on efficiency of movement, leverage, and timing.

This Level 1 class is for the ladies! Same BJJ Level 1 starter pack we’ve been offering, with a stronger focus on self-defense. If you’ve been curious about BJJ but are apprehensive about rolling around on the ground with a bunch of dudes, this is your chance to get started!

In Level 2 (open to all), we will build on concepts and vocabulary of movement from the various positions with a larger portion of class-time dedicated to progressive resistance drilling, positional sparring, and straight sparring. If you have grappling experience from the past, you are welcome to jump into the Level 2 course!

These are both 4 week courses that meet once per week.

Callie Brennan is a brown belt in Brazilian jiu-jitsu under Team Fabio Clemente. Callie has been training and competing for the past 7 years. She began teaching beginner and intermediate students under the guidance of Pan American champion Babs Olusanmokun and multiple time World and Pan American champion Dominyka Obelenyte. Callie has competed locally and internationally winning gold at American Nationals as a white belt, the Montreal IBJJF Open at blue belt, and New York IBJJF Open at purple belt in her weight. She also medaled in the Abu Dhabi Pro Trials at blue belt.

Callie recently founded Rag Doll Camps with her training partner and coach, Dominyka Obelenyte, with a mission to close the gender gap in the sport. She also teaches privately. Callie initially began CrossFit to supplement her jiu-jitsu practice, and she is looking forward to sharing it with the CFSBK community!

Feel free to contact Callie directly with any questions!

June 2nd: My Body, My Jokes

My Body, My Jokes is a bimonthly stand up comedy show all about living in these strange, human-shaped bodies. June’s theme is immigrant and second generation American experience. Your hosts Ayanna Dookie and Maria Heinegg and coproducer Jenna Jerman bring you a group of hilarious comics telling jokes about their own immigrant and child of immigrant experiences. We’ll also be serving you with facts and information on immigration by our expert of the month, Nedia Morsy.

This month’s proceeds go to Make the Road New Jersey, which builds the power of working class and immigrant communities to achieve dignity and respect through high quality legal services, transformative education, and policy innovation.
$15 in advance/ $20 at the door. Go HERE for tickets.