Sets across. Same load as last week. The “buy-in” to pull from the deficit is to pass the standing toe touch test. If you cannot touch your toes without bending your knees, you will not be able to get into a safe position to Deadlift from a deficit. In this case. perform the Fitness programming today, 3 x 5 from the floor, heavier than week 1.

Aim to keep moving, resting minimally between exercises, and build to a challenge set or two on each. The sled should NOT be a sprint, it should be “heavy but moving.” 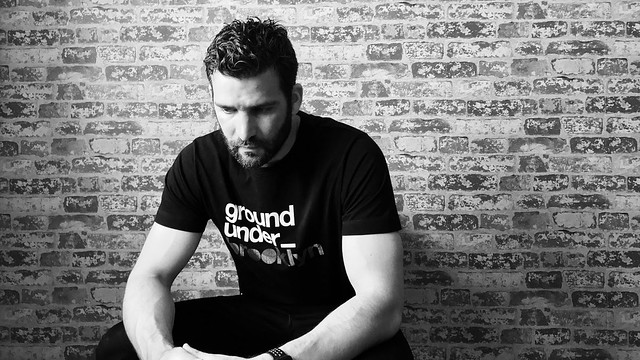 By Chris Fox and Eric Arbitman

Eric has been a member for a few years now, and while I don’t think he’s got a bravado bone in his body, you’ll no doubt have noticed the impressive amount of strength and skill he’s accumulated in that time. Quietly going about doing the work, always approachable, eager to improve, and coachable, we’re proud to honor him this month.

In a departure from the usual Q&A format, Eric (who is clearly a talented writer) has written his own Athlete of the Month article! Read on below to be swept into his introduction to CrossFit, and some of the ways it’s affected him in terms of fitness and beyond. I’m sure most of us can relate to an item or two.

I remember the moment clearly.

Was a crisp November morning; the sun rising slowly, orange hues peaking through the buildings to my right, rays glaring off the skyscrapers to my left; cool river air filling my lungs, sweaty under my layers, the park peaceful, almost silent.

As I trekked through Brooklyn Bridge Park at a slow and steady 8:30 pace, on mile 3 of the 5 mile loop I ran mornings before work, I was aware of something off in me.

A few weeks past my 39th birthday and 40 fast approaching, I was having an existential crisis.

Despite running regularly, and exercising in some form or another throughout my life, I felt—weak. Stressed out from long, unpredictable, demanding work hours, I felt—bad. My neck and back were tense and hurting me. I was tired all the time, and despite my regular morning runs, I was out of breath after climbing the steps of the 63rd & Lex subway station on my way in to the office, and exhausted after carrying heavy packages home from the supermarket.

A loud voice in my head was telling me this was it, this was the beginning of the decline that happens when you turn 40. “This is normal, natural,” the voice said, “sorry, man, just accept it.”

But there was a second voice.

Later that night, deep into an online research rabbit hole, having no idea what I was in for, I registered for Foundations at CFSBK. I knew nothing about CrossFit, or CFSBK, only that the gym was nearby and the schedule worked for me.

I showed up early to my first Foundations class, which gave me an opportunity to watch a group class. I stood in awe, intimidated by the sounds of barbells crashing to the floor, feet landing on wooden boxes, sweaty bodies grunting and moving in ways I hadn’t seen before, and foreign sounding coaching cues.

The intensity of the class I was watching made me feel silly in my running sneakers, but that was erased moments into my introduction to CrossFit with Coach Chris Fox, who got me out of my head and focused on my entire self.

I still have the journal entry:

Finished in 10:15, Squats and Ring Rows felt good, struggled with the Sit-Ups.

I made my way through Foundations with Coach Chris, Coach Whit, and Rob, who is still a member, and was deemed ready for group class.

By the end of Foundations I saw and heard deeper layers to group class. The unknowns gave rise to a clarity, and I saw a diverse group of members pushing themselves mentally and physically and encouraging one another. I saw coaches spending time with individuals providing enthusiastic corrections and positive affirmation where needed, and I saw endorphin induced camaraderie and smiles after class was done.

Despite being barely able to hang from a bar, scraping my shin after a missed box jump, whipping myself with a jump rope, banging my chin with a barbell on a Push Jerk, and countless other early CrossFit humiliations, I knew I was in the right place. Everything was there for me. No excuses—I just needed to do the work.

The first year and a half my commitment was moderate. I attended class once or twice a week, three times on a good week, and while I made significant and noticeable improvements, it wasn’t until two years ago that I made the decision to fully commit. I felt and saw the benefits of showing up a few times a week—now I wanted to experience the full program and take things to the next level.

The additional commitment also required I commit to leaving work at a reasonable hour, and to make other compromises in terms of how I spent precious free time. I even had to commit to the small things, like packing and taking my gym bag with me to work because if I came home first to change, it wasted time and was hard to get back out to the gym.

I’ve been going strong in that routine for two years, and the results are undeniable. I’ve made significant improvements in terms of physical and mental toughness, evidenced by the weights I lift, number of reps I complete, and even the reflection in the mirror.

Progress in the gym has also been highly correlated to progress in other areas. Work, while stressful and challenging, and occasionally having me questioning what I’m doing with my life, has been rewarding. I laugh and smile more, and focus my personal time and effort on people who enjoy working and playing hard like I do—I want, need, crave, demand positive, healthy influences.

Even though gray hair is starting to show, my vision is starting to deteriorate, personal tragedies are accumulating, and countless other memorializations of life at this age are becoming impossible to outrun, as far as my sense of self is concerned, the first few years of my 40s have been the best of my life.

I’ve accepted and am proud to call myself a full blown CrossFitter, and as a CrossFitter I talk about CrossFit to an annoying degree. In addition to talking about AMRAPs, EMOMs, and other nonsensical terms to the general population, I talk about CFSBK. From the coaches, to the members, to the space, to the not having to stress about signing up for a class, or worse, not getting in to a class because it filled before I signed up, CFSBK has it all covered.

All I need to do is pay my dues, show up, and work my ass off—and the results and experiences have been transformative.

Things early on like hitting a Clean that actually feels like a Clean, stringing together a few double unders, and getting that first Pull-Up; then later—PR’ing a Snatch, completing a workout at Rx, a first Muscle-Up, a first Handstand Push-Up. Then there are the experiences with others, like training for “Murph” with Pat and then finishing it last Memorial Day, seeing Rob’s name from Foundations on the CFSBK leaderboard, and having the best judge ever for 19.5 pushing me beyond what I thought were my limits; and of course the coaches, who have been there each step of the way, from the warm welcome on the first day of Foundations, to the pat on the back after nailing a lift, and pumping a fist to acknowledge the improvement after pointing out a subtle correction or pushing me to add a few more pounds to the bar.

So yeah, my experience at CFSBK has been significant to say the least, and the recognition of Athlete of the Month will go down as one of my most prideful accomplishments. I appreciate what CFSBK has been and done for me, and I hope that my presence as a member has been a positive influence for other members and coaches, without whom, I wouldn’t be where I am—which is feeling strong, healthy, confident and looking forward to what the rest of my 40s and beyond has in store.

Maybe I’ll be walking on my hands.

_____________________
Yesterday’s Results Board: “Whitten”
Are Sitting Patterns Related to Diabetes? Blue Zones
4 Tips for When You Love Lifting But Live with Depression BarBend