At the start of a running clock, you have 2 minutes to perform:
9 Chest-to-Bar Pull-Ups
9 Burpees
3 Squat Snatches, as heavy as possible

Rest for the 4 minutes between the 2 minute mark and the 6 minute mark. If you finish the work before 2 minutes is up you have extra time to rest. Repeat for 5 rounds total. You can build throughout the workout or do sets across at the same load. Score total load moved on the Snatches. Scale the Chest-to-Bar Pull-Ups to Chin-Over-Bar or Jumping Chest-to-Bar Pull-Ups as needed. 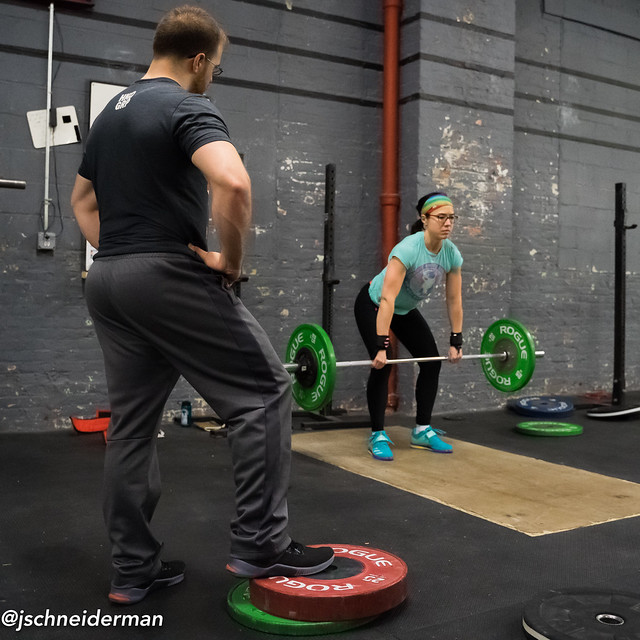 Coach Frank watches as Stella dials in her Clean. Want to work on your Olympic lifting with a 5-time Nationals medalist? Our new afternoon cycle of Next Level Weightlifting Club started yesterday, but there’s still time to sign up. Read on for all the info!

As you may have heard, we are losing our beloved Coach JB to the West Coast. Here are the details:

Come out to wish her well! We’ll have a formal farewell on the blog soon.

_____________________
Yesterday’s Results Board: Muscle-Up Transitions | Deadlifts, Muscle-Ups
Find Balance in Training Breaking Muscle
Ask a Swole Woman: Am I Too Young to Lift Weights? Self