Use a controlled “faster up-slower down” tempo for both movements. Go heavier than last week. Use a box height that allows for “squat depth” on the working leg.

*Warm up and then perform a set of Bench Presses, followed by a set of Dumbbell Front Rack Step-Ups. Repeat for 3 work sets of each, resting 30 seconds to a minute between movements.

Sub 2x Singles for dubs as needed, and to 15 through 3 on the burpees to keep intensity up. 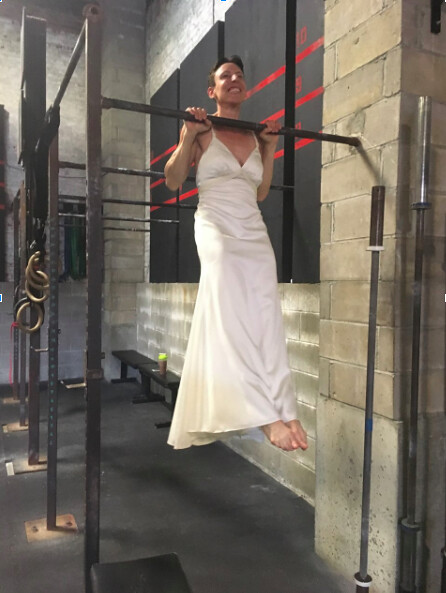 It can sometimes feels like a broken record, but it’s true. We’re fortunate to have so many great Athlete of the Month options on Degraw Street. This month I got to sit down with long time member and winner (to my mind) of the Most Encouraging Athlete of the Decade award, if we had one. From just about day one she’s gone by a nickname in the gym, so ladies and gents… here’s Worm!

Fox: Thanks for sitting down with me, and congrats! I’m glad we finally caught up with each other. So, how’d you begin your journey here?

Worm: Thank you! I’m so, flattered that you guys thought of me for this, it’s really great. I took my Foundations in early 2011—February, I think. I’ve always been a swimmer and had been doing that as my main form of exercise, but long story short, I came to realize that I was having some significant allergic reactions to the pool environment. I was sort of thinking about trying something else anyway, so the allergies just pushed me along. I knew someone, my friend Carrie, who was working out here at the time and also knew I wanted to do a group activity. I’d worked out at other gyms for a few years, and even worked at a YMCA, but just working out was never fun for me. I was excited to try CrossFit! I started with 2x/week right after wrapping up my Foundations course.

Fox: What were your initial impressions of the gym?

Worm: It was sort of intimidating! I had never squatted before, never even considered it, so David was the first person to teach me how to do that at the Intro Class. Some stuff was familiar to me [Worm won an award in 2nd grade for being the first girl in her school younger than 3rd grade to be able to climb to the top of the ropes!—CF], but lots of it was not. I was excited to see Pull-Up bars and climbing ropes, but throwing around barbells and swinging kettlebells were not things I’d ever tried. Aside from that, there was this whole different language that surrounded barbell training: Hangs, Powers, Cleans, Snatches, Jerks. It took a while to learn it all. And when I say “a while,” I mean about 2 years.

Fox: How’d you end up with your nickname?

Worm: Ha! There were 3 Saras in my Foundations class, and I was the 3rd to be introduced. For some reason my old nickname from Girl Scout sleep-away camp, “Worm,” came to me to set myself apart. I always thought worms were cool and would dig them up to sort of keep them as pets, hence the nickname.

Fox: That’s funny! I always figured it was because you were somehow “wormy,” but couldn’t figure out what that might mean. Were you an athletic kid?

Worm: I guess I was. I ran school track and cross country, and eventually found swimming which was the sport I was best at and even won a few meets in. I was pretty tomboyish and definitely made more friends with boys than girls, so I played all the typical neighborhood games with them like manhunt, spud, or whatever. I basically ruled the playground.

Fox: Oh man, I used to LOVE manhunt! Where’d you grow up?

Worm: I grew up in Jericho, Long Island, the oldest of 3 siblings, all brothers. My family is still there. It was a nice enough place to grow up but most of my positive experiences were pretty relegated to my block and playing with the kids on it. I stayed in Long Island for college and attended Stony Brook University and lived on campus.

Fox: Have you always lived in New York then?

Worm: Mostly, but I did live in North Carolina for a while. In 2008 my best friend Mike and I spent some time hiking a section of the Appalachian Trail. We covered about 200 miles in just over 6 weeks, winding up in Hot Springs, North Carolina, just outside of Asheville. That hike, that time in my life, was amazing and I’m so thankful for the memories I have from it. Every day was a new adventure. We’d be moving all day and winding up exhausted by nightfall, spending most nights playing spit by a fire. At one point we had chosen to end the hike and spend our last few weeks in one place, which is how I ended up really liking Asheville. SO much so that I figured “why not move here”? I did, for about six months, but eventually came back to New York for a job.

Fox: I love Asheville, too, though they complain there are too many Brooklynites moving in. 😉 What do you do for work?

Worm: I’m a social worker at Quest To Learn Middle School in the city. I’ve worked in public schools for 14 years now and really love it. As a social worker, I really get to know the kids and their parents in a way that their teachers and administrators might not. Most of the kids are dealing with a variety of challenges, and I feel very honored to be part of the process, to be able to be make a positive difference in their lives to the best of my capacity. Quest to Learn is a really incredible school, with a philosophy that kids learn best when they are engaged in play. The principal is a fantastic human and one of my personal heroes. I’m excited to say that last year I also began coaching the middle school track and field team! It’s rewarding work that gives me that great feeling of making a difference. And best of all, I get to use all of the stuff we do here at the gym. The track kids know how to Air Squat, do Burpees, and sometimes we even do Pull-Ups on the scaffolding across from the school.

Fox: Your positivity and passion for your work really comes through in how you speak about it, which is very inspiring. I hope it comes through in the article. I understand you and I both celebrate wedding anniversaries in a few days and 10 years apart. Congrats! How’s you guys meet?

Worm: Yes! I met my wife, Hope, a few years ago at a friend’s birthday party. It was memorable for meeting her, but also because it was in a crappy diner. We laugh about it and still can’t figure out why this mutual friend had their party at a crappy diner, but whatever. Hope and I actually got into some heated dialogue at that party based on the fact that I work in public schools and she’s in the private education sector (in addition to being a yoga teacher). Luckily there was mutual respect, and in the end a mutual attraction. We’d been friends for about a year when a minor tragedy gave me the opportunity to show my affection. I heard that Hope had broken her foot in a fall and decided that sending her flowers would be my way in. It worked! She called me, thanking me for being so sweet, and the rest as they say is history. Funny thing is, she later confessed that the break happened when she fell checking a text message from me while walking down the stairs at school! We were married just over a year ago on July 2, 2017.

Fox: What a lucky break? Haha, sorry! What a sweet and funny story. What do you do for fun outside of work and the gym?

Worm: I’ve been getting back to a little swim practice, though I still can’t go all the time. I’m an avid reader, mostly novels and only one at a time, and I typically enjoy more upbeat topics. I also love to hike and ride a bike. Commuting via bicycle terrifies me but my brother, Dave, and I have been doing the 5 Borough Bike Tour for years now, and I always look forward to Summer Streets. I realize that I’m basically still just a kid and just love to play. In very exciting news, Hope and I are moving into a bigger apartment because we are planning to begin going through the adoption process and are hoping to share a home to two kids sometime soon!

Fox: That’s so amazing! I think the fact that you’re still a playful kid at heart will help make you a great mom. Getting back to gym stuff for just a minute, what are some things you’ve worked on in CrossFit over the years?

Worm: Something I like about it is there’s always some goal to be working on. When I started CrossFit I was doing knee Push-Ups, and now I’m able to do a 20 in a row on my toes and a few Dips. I would love to progress that to a few Handstand Push-Ups. I think I might have the strength, but I am working on my fear of being upside down. I used to be able to do one Pull-Up, and now I can do them with added weight! So, maybe a Bar Muscle-Up would be nice?

Fox: Your success alone would be plenty for some people! What keeps you coming back?

Worm: Just coming to the gym means so much to me. I’ve got close friends here, both that I had and have made. Sasha (former Athlete of the Month) was the officiant at my wedding! And I’d like to publicly thank Coach Brett, who always goes the extra mile at Short Circuit. I appreciate how CFSBK has helped me to be strong and resilient both physically and emotionally, because that’s what the culture is about. It’s not about losing weight or looking a certain way; it’s about being a better version of you however you choose define that. The fundraisers the gym participates in speak volumes about what this community values. The not-so-little things like Iron Maidens and seeing women come together for each other, and how the gym puts its values right up front on the blog and at the entrance to the physical space means a lot to a lot of people I think.

Fox: Thanks, Worm. I couldn’t agree more. I’ve really enjoyed this interview. Last question! What should we be looking for in a future AOM?

Worm: Someone who’s encouraging, shows a willingness to help, and is here to have some fun!