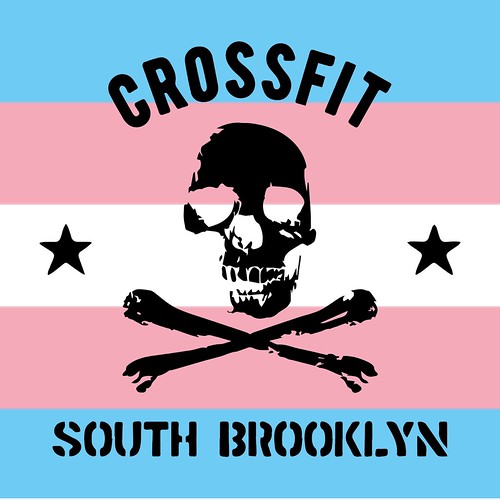 On Monday, we posted the following statement of inclusion and anti-oppression:

CrossFit South Brooklyn recognizes the dignity and worth of every person and is committed to creating an environment that is safe, accessible, inclusive, and respectful for all members and visitors. To create this important space for our community, we do not tolerate oppression on the basis of race, ethnicity, economic status, gender/gender identity, sexual orientation, immigration status, religion, ability, or age.

The importance of community is central to the CrossFit fitness methodology. For CFSBK, this means creating a space where all members are truly welcomed, supported, and celebrated in their fitness and other life pursuits.

What does this statement mean for the transgender community at CFSBK?

You may have noticed the pink, blue, and white flag hanging on our front pull-up bar across from the more commonly known rainbow flag symbolizing LGBTQ pride. This flag represents the trans community, and this year for Pride we are focusing on this community for two reasons.

First, while the LGBTQ rights movement has made a lot of progress over the past few decades, there is still a long way to go, particularly for members of the trans community, who face significant discrimination and violence. For this reason, CFSBK’s Pride weekend workout will be a benefit for 2 nonprofit organizations serving the trans community: the Sylvia Rivera Law Project and Marsha P. Johnson Institute. Instead of the usual “male” and “female” Rx weights, these suggested loadings will be named after the late Sylvia and Marsha in honor of their contributions to the LGBTQ movement.

Second, the signaling of inclusion to the trans community from a gym is an important gesture to show our commitment to creating a supportive fitness environment. Gyms are not typically safe or welcoming spaces for trans and gender nonconforming people due to the fear of stigma, discrimination, violence, and issues associated with the often-gendered aspects of gym environments, such as locker rooms and bathrooms. These factors (and more) create significant fitness roadblocks for trans people who simply want to work out without fear.

You may have noticed the trans pride stickers on our locker room doors at 608. These stickers indicate that CFSBK welcomes our members and visitors to use the locker room of their choice. We also ask our staff and members to support our trans and gender nonconforming members in these spaces by recognizing that they are where they belong—just as we are welcoming in all other aspects of the gym. Additionally, CFSBK’s shower stalls were built large enough and with shelving inside the door so that anyone with concerns for privacy or modesty can change separate from the common area.

A note on gendered prescription loads on workouts

CrossFit’s programming often includes two gendered “prescription” weights for males and females. Offering specific weights has practical value for standardization of the workouts, competition, and informing programming intent, but in practice, for most of us, these numbers are more informative than prescriptive. Each person’s strengths and abilities are unique and specific to them. While an Rx may provide some aspirational goals for loads on workouts, the load or version of a workout has less to do with gender and more to do with your own current abilities.

We recognize that creating truly inclusive environments for all members is an intentional and ongoing process, and CFSBK welcomes feedback and questions from our members on how we can uphold our value of inclusivity.

Join Us Tomorrow for “Stonewall”!

As Saturday’s programming, CFSBK will hold a workout for Pride weekend called “Stonewall,” in honor of the 1969 Stonewall Rebellion. Stonewall was a weekend-long demonstration and riot at the end of June against police raids and harassment at the Stonewall Inn in Greenwich Village, which many mark as the birth of the modern LGBTQ rights movement.

This workout will be free and open to all, so feel free to invite friends and loved ones! We will be collecting suggested donations of $20 (or an amount that is meaningful to you) to benefit the nonprofit organizations mentioned above. No one will be turned away for lack of funds.