*Perform 2 work sets of Back Squats followed by 1 work set of Front Squats. Each Squat set is supersetted with Dumbbell Rows. Use a “slower down, faster up” tempo for both lifts. Rest 30 seconds to a minute between movements.

The barbell should be on the heavy side of medium for you. All singles are okay.

The barbell should be medium-heavy for you. Scale to regular Pull-Ups or Jumping Chest-to-Bar as needed. 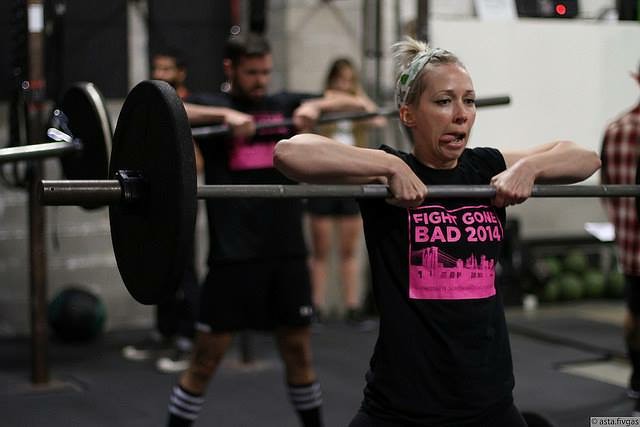 Registration for our upcoming Starting Strength Program cycles opened yesterday, and there are still spots left in some of the classes! Over the past few weeks, we’ve been bringing you some Humans of New York-style interviews with our Starting Strengthers. Who are these intrepid powerlifters? What brings them together? What is Starting Strength Program like? How is it different from other classes?  What kind of funny stuff does Coach Jeremy say in class? Let’s find out!

In our previous Humans of Starting Strength post, we heard from Anise. In our final installment (for now!), we talked to longtime CFSBKer and Starting Strengther Julie B. (aka OGJB), who is sadly leaving us soon. We”ll miss you, Julie!

What are some differences between Starting Strength and group class?

I think having the time to breathe, rest, and concentrate on my lifts between each set and not being worried about missing a set due to time constraints. I was lucky to have had Margie for some private sessions and she elevated my lifts and SS took that and escalated them. The coaches in group class really did an amazing job at keeping so many group class attendees in order but ultimately having the time to think about what I’m doing with Jeremy guiding individually, and the gains I’ve had, will keep me in SS.

What are a few of the biggest things you took from or accomplished in SS?

I can do chins! I PR’d and made it to blue bumpers on my Deadlifts’s! I get to see pictures of little Clio weekly!

CFSBK is so welcoming that to find an even deeper level of community was amazing. SS is nerdy and dad-joke-loving and such a smart, weird, and fun supportive group. You learn the quirks and ways of everyone and support all in their achievements. I’ve been struggling and working so hard to get my Chin-Ups and a string of health issues kept setting me back. A few months ago a certain SS mate, you know who you are (Wendy), just stared at me one night and said, “You don’t need that orange band,” pretty much right after Jeremy said ,”You don’t need the orange band. Give it to me,” which I did because well… I don’t know. And I got my first one. Then my second. There’s video, so it legit happened. Wendy is way scarier than Jeremy, that plus FINALLY my blue bumpers on Deadlifts (until I smashed my finger) are two of my favorite CFSBK achievements. Jeremy and other SSers having such confidence in you and what you will achieve is just wonderful. Its like family. A very weird little muscle-y family.

Were there any major challenges (physical or mental) that you had to overcome?

Oh yes. I can never thank David, Fox, Margie, and Jeremy enough for working with me and keeping me moving. I’ve been in and out of surgery for several years with an on-going health condition that constantly set me back. David was actually the one to catch it. He took me aside several years ago after a WOD and asked me if I was ok, that my lips were very blueish. I think any other training facility would have cut their losses and said you’re done but he sat with me and we talked and worked out a plan so I could remain mobile. Fox had a plan when he had me in class. Margie got me strong again. Jeremy increased and is still increasing my strength. I’m tenacious as hell so to find a team that was on-board with my physical messiness was amazing.

I’m in the process of moving out of state. Oh hey, guys, surprise I’m leaving! And it breaks my heart to not be part of this community on an almost daily basis.