Choose one of the following scaling options, and spend 15-20 minutes developing your hand balancing:

Rest after each set or attempt and don’t turn it into a 20-minute AMKAP (As Many Kick Ups as Possible). If you’re not spotting someone, you can use the rest periods to do some light stretching or light rowing, jogging, cycling, etc. 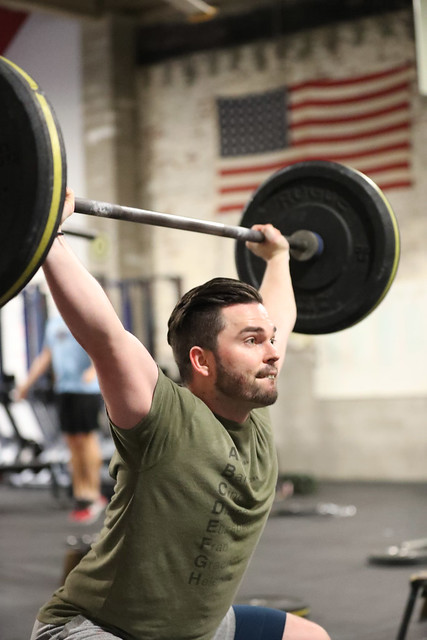 Jake M. knocks out some Overhead Squats at last week’s Friday Night Lights. Come out to the gym again this Friday night to get after Open Workout 18.4 with yer buds or just do some cheering. Go here to sign up for a heat! | Photo by Thomas H.

After seeing the movements in the announcement for 18.3, I sent a text to a friend that read, “This is not going to be a good one for me.” I saw Ring Muscle-Ups programmed and, even though I can do them, I’m not nearly as efficient as most men who are competing in CrossFit. Games Athletes can pretty much all do thirty Muscle-Ups unbroken. Regionals athletes can easily do 30 Muscle-Ups for time in a matter of minutes. I still don’t have the technique quite down. I compensate by over pulling with my arms and this strength fades really quickly for me. Like all gymnastics movements, more needs to be done with the legs and hips than I have yet to fully embody when I am on the rings. So, when I see this movement programmed in 18.3, I immediately think of what other athletes can do that I cannot. I have mentally given up on this work out before it even begins. I’m guessing some people felt the same way when they saw Double-Unders or the Overhead Squats at the prescribed weights.

Leading up to the workout on Friday, I had a solid game plan in place. I knew that I needed to break up the Double-Unders early to save my shoulders and keep my breathing as steady as possible. This meant stopping when I started to feel the burning sensation in my shoulders or grip. I knew that I need to try to do the Ring Muscle-Ups without going to failure. Going to failure on any movement is extremely taxing on the body and also takes a subliminal toll on the mind. If I fail at something during a workout, a quick flash of panic hits me and can totally throw me off. I moved through the first few pieces well and got to the rings. I came down every time I felt like I might fail the next one to save energy and shake out my arms. I failed my very last one but stayed calm and took a few seconds until i was confident I would hit it. I wasn’t thinking about anyone else at this point, because I didn’t know anyone else who had done the workout yet and I wasn’t trying to chase a score. I was just trying to keep moving and do my best. I ended up doing pretty well considering my attitude from the previous evening.

I knew my score wouldn’t be a top 200 score in the region, but I didn’t expect it to land me where it did. The old Compare and Despair set in after looking at the Leaderboard and seeing other athletes that I had been competitive with in 18.1 and 18.2 beating me by 70-100 reps on this one. I came up with a game plan for my redo on Monday and prepped myself. I decided to push the Double-Unders a little harder to give myself some extra time on the back end. My shoulders had felt pretty good on Friday. It was more the breathing that became the challenge. This strategy completely backfired! My shoulders were fried. My Ring Muscle-Ups went to singles early on. The dumbbell felt way heavier. However, I was still moving faster than I did on Friday, so I kept pushing… until the Bar Muscle-Ups. Previously I had done 3 sets of 4. On this day, it was singles right off the bat. I was completely thrown off by how hard they felt and started doing whatever I could to get over the bar, i.e. pulling more with my arms, letting my kip fall apart, and generally making the movement way harder for myself. I hadn’t even considered the possibility of this problem, so I was unprepared when it hit. I looked at the clock: five reps done and it read 10:30. I had finished the Bar Muscle-Ups at 10:20 3 days earlier. I stooped in a low squat looking at the floor. I gave up. I felt defeated and like I had failed myself. Part of it was that I had mentally given up and stopped doing the work out. I can’t remember the last time I did that. The other part was that I hadn’t reached the goal I had set for myself. What I did do was give it the best effort that I had in me that day but for some reason that wasn’t enough. Because my best effort on Monday was not equal to my best effort on Friday, I equated it to failure.

I got on the Assault Bike and just let me legs move the pedals while I sent a flurry of frustrated texts to my coach. Arturo, who has seen the whole thing unfold and could likely sense that I was upset, came over while I was mentally freaking out and said, “You know, you’ve made a lot of progress since you started here as a member four years ago. You work really hard every day and you’re doing great. Think about how far you’ve come.” The message that I tell everyone else but find so hard to accept for myself was exactly what I needed to hear in that moment. It wasn’t said to try to make me feel better but in a genuine way. I paused for a second, and instead of responding with the classic, “Yeah, but…” like I wanted to, I said, “You’re right. Thanks, man.” Every day won’t be a PR day. In fact, most won’t. But giving 100% is something that I can do.

I’ve found it very interesting to write these diaries thus far. It’s crazy to see the same pattern repeat itself each week and then write about it again and again. Obviously, it’s something I need to continue to work on. On the up side, it has led to some very interesting conversations in the gym with a few members. Why do I beat myself up in this aspect of my life? Is it just because I’m competitive? Do I feel like I need to prove something because my job is coaching CrossFit and somehow that means that I need to be a top athlete in the world?

I asked a few people where they talk negatively to themselves in their lives and where they don’t. Occupation seemed to be a big source of negative talk, as did things where expectations were set (not goals, expectations). Things where people were positive: hobbies and activities where people saw themselves making progress without being competitive with others. This is not an all inclusive list by any means. It only comes from a few conversations, but it does give me a lot to think about. Think about it for a second. Do you ever beat yourself up? If so, why? What it is about that thing that creates the pressure you put on yourself? All good learning. More to come next week!