Warm up and work up to a heavy triple.

Choose one of the following scaling options, and spend 15-20 minutes developing your hand balancing:

Rest after each set or attempt and don’t turn it into a 20-minute AMKAP (As Many Kick Ups as Possible). If you’re not spotting someone, you can use the rest periods to do some light stretching or light rowing, jogging, cycling, etc. 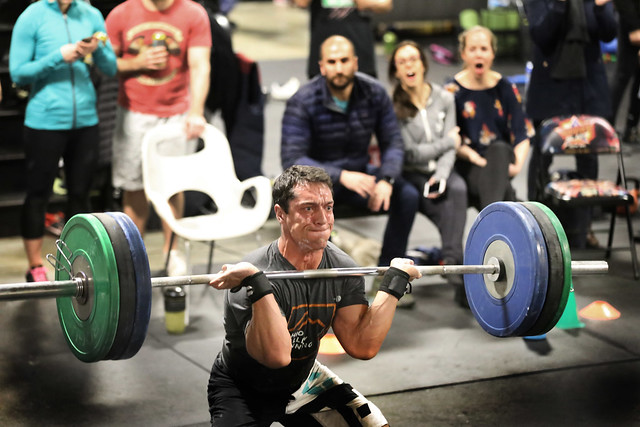 18.2 and 18.2a were a nasty combination that made you feel like you lost both legs and then laughed at you while you tried to build to a max Clean. Well done, Dave Castro, well done.

I knew going into it that the first part would be a strength of mine. I have a good grasp on my ability to go dark and make it hurt in a workout that requires all-out effort for a short period of time. I had no idea, however, how this would effect my Clean. I thought I would be breathing heavy, but I had no idea how badly my legs would hurt and that I would actually feel like I was drunk when I went for the first Clean. My first attempt happened at Friday Night Lights, and the energy was insane! I went as fast as I could. During the rounds of 8-10 reps, as my legs wanted to quit, I just kept telling myself, “Move no matter what. It will hurt more if you stop moving.” My positivity helped me to push through.

My legs were so beat up that my first Clean felt like I was going for a PR even though I had about 83% on the bar. This is weight that takes effort, but I’m very confident that I’m able to hit. I barely got under this one and my midline and legs completely gave way. The mental strength that was present a few minutes earlier was now on shaky ground. I then told myself exactly what I say in group class, “Commit to getting under the bar before you even start the lift. Fast elbows, stay tight, and drive up hard.” I hit the next lift confidently. Staying calm, I failed to hit a heavier weight. Then I failed my final lift, laughing as I awkwardly tried to save a lift that was never going to be saved. Friday Night Lights ended, and I was happy with my performance. Sound like last week’s “Open Diary” entry?

Monday afternoon was my second attempt. I talked to my coach, and the plan was to make it hurt again and go for broke on the Clean. I was going to start lighter on the first Clean to get some confidence and then keep adding weight. This time during the rounds of 8-10, my legs didn’t just want to quit, they actually started shutting down. Jumping in and out on the Burpees became a max effort each time, and I could feel my pace slowing. I stopped myself from looking at the clock, knowing I just had to finish.

As I jumped over the bar for the last time, I looked at the clock to see that I had actually beat my first time by 2 seconds! I landed, collapsed, and immediately felt searing pain in my quads. This pain was nothing like the first attempt. This was much, much worse. I was on my hands and knees trying to relax, and I started drooling. Literally drooling on the floor. My body was shutting down. I got up, walked around for three minutes, then went for my first “light” Clean: fail. Oh. Oh, no. I refocused and hit the weight but it was crushing. I tried with everything I had just to get back to the weight I had hit on Friday but to no avail. Three straight fails. The 12 minutes ran out and I ripped off my belt, yelled a profanity and walked away from the people who had been nice enough to cheer me on, leaving them to look at each other uncomfortably. Fun right? After a few minutes I walked back to them, thanked them for the support and threw some high fives. I was happy with my first score and was going to keep it.

I felt like I let this frustration go and accepted the outcome, but this little voice in the back of my head kept nagging at me. Looking at the scores on the Regional Leaderboard, I started to get down on myself, my potential, and my training. I was doing exactly what I said not to do a few weeks ago (and again last week): comparing myself to others rather than seeing where I had succeeded. I starting feeling overwhelmed. I was at a loss for how I would ever get to the level that these other athletes were on, or if that was even a realistic goal.

Suddenly I felt like giving up. WHOA WHAT?!? Yup, just one peek at the Leaderboard, and I wanted to stop competing in CrossFit. Dramatic. Very dramatic. I slowly started to come back to earth. My goal to start this year was to end up in the top 250 in the North East Region, and I was close to that. So, another small meltdown in week two to learn from. I recovered faster from this one but my tendency to get negative is still there. Let’s see if I can avoid this altogether next week.

There are just 2 spots left in Coach Keith‘s next Active Life Strength class,  which starts Monday! Still need some persuading before you smash that REGISTER button? Here’s a testimonial from Ali C., who was in the cycle that just wrapped up:

I decided to sign up for Active Life Strength because of nagging neck pain and knee pain that were preventing me from getting better at CrossFit. I had been following Active Life on Instagram and knew that they addressed deficiencies in a way that was different from physical therapy, which I’ve never had success with.

Keith started the cycle with an assessment that pinpointed everyone’s weaknesses and sources of pain. Over the next 8 weeks, we all had our own plans on how to improve and get pain-free.  For me, that meant incorporating a progression of Presses and Step-Ups. After 3 weeks, the herniated disc in my neck was totally pain free. When I retested my Step-Ups, it was clear that I had gotten stronger and the “weak leg” was no longer so. Most importantly, I don’t feel broken down and decrepit like I did 8 weeks ago! I definitely recommend anyone who feels stalled in their progress or always feeling like they’re on the verge of injury to give it a try.

So what are you waiting for? Go HERE to register!