Warm up and work up to a heavy set of 5. The barbell comes off the floor. 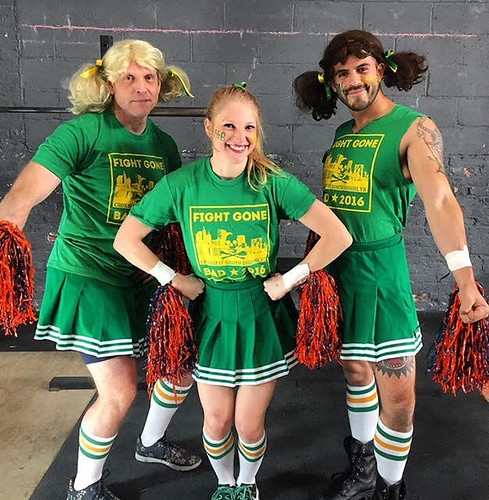 We look for members who show a list of traits for Athlete of the Month honors, and this month we’ve got someone who hits on all of them. Consistent training? Yep. Engages in both fitness and social activities at CFSBK? Yep. Has made progress in a variety of ways and goes the extra mile not only for herself but also for fellow members? Yep and yep! Allie couldn’t be a better example of what we look for. Read on and learn more…

Fox: Congrats, Allie! Thanks for coming in to sit down with me. Starting at the beginning, when and why did you start CrossFit?

AB: Wow, thanks for the honor! This is very exciting. I started at CFSBK in May 2014. I’d recently broken up with my longtime boyfriend and was busy trying new things and getting fit. I had started running, and was pretty into another fitness cult, Soul Cycle, so I figured I’d give this one a try. Funny story, I actually thought I signed up for an intro class at CrossFit Prospect Heights, which is the gym I passed by on a run and wondered what what was going on in there. I show up for the class and the gym is closed. I searched my email and realized that I actually signed up for the Free Intro Class at CFSBK. Luckily I was planning to be early so I had enough time to get over here and that was that. I met David, and he made it very clear what made CrossFit different from other methods. I had to wait until summer break to do Foundations, but I’ve been coming ever since.

Fox: So from one fitness cult to another! Were you always a gym junkie?

AB: Not at all! I was never into fitness, had never been in a gym, and had no idea what weightlifting was. I was always an art and theater nerd whose main form of exercise was occasionally taking the stairs. I was never overweight as a kid, but I certainly wasn’t what you’d call fit. Then, in my senior year of high school I attended an arts camp and gained about 15 lbs that just sort of stuck around. I actually weigh the same now as then but at a pretty different body composition.

Fox: So we were your introduction to the gym. That’s pretty great! What were your first impressions?

AB: David was immediately welcoming, and made me feel comfortable even with no prior training experience. We learned how to Squat and he taught us why we should actually Squat below parallel, something that most everyone tells you not to do. Right away I felt like CrossFit was going to be for me. The coaching was attentive, the progress was quantifiable, the exercises were varied, and the coaches could explain why something was beneficial. The biggest thing that stuck out was the emphasis on health, not necessarily on vanity.

Fox: I know you like to drop in to gyms when you travel. Do you have a favorite?

AB: CrossFit Acadia in Bar Harbor, Maine. They’re so great and welcoming and the classes are well structured a la CFSBK. They even know DO and Inside The Affiliate.

Fox: What can you be found doing when you’re not at the gym?

AB: Man, exercise really is my main hobby now, so I’m here a lot. The gym has given me a social community and a place to have friends as well. Being fit even makes me relish mundane chores like carrying groceries or washing the dishes. I’m really appreciative of my ability to do simple stuff. I work as a music and drama teacher at Achievement First East New York Middle School, and I really love my job. I get to meet every student since they all have to take my class for a semester. In addition to my classes, I direct musicals and head up the technical theater team. It was my first job out of college, and I’ve been there since 2009. The school and the students are really special to me. Other than the gym and work, I like to go see live music and will often buy a ticket just for myself. Any and all types of music are great by me. I’ve even been to Saint Vitus! The last show I saw live was Espiranza Spalding over in Red Hook at Pioneer Works. She was amazing. My boyfriend Ben and I just celebrated our two year dating anniversary! He doesn’t do CrossFit but he does Squat and Deadlift. 🙂

Fox: I finally got to include a Saint Vitus mention in one of these articles! I hear you and Ben have a funny origin story. Care to tell it?

AB: Of course… it’s pretty funny now! We met online and set up a first date, and of course I was at the gym that day before the date. Long story short, I took the tail end of a rowing machine to the face and suffered a cut that required seven stitches. I felt awful and was worried it would seem like I was just trying to ditch him, so I texted him picture of my bloodied and bruised face. Can you believe, lol, this guy still came to meet me? We went to the bar that we had planned to meet at that night and had a few drinks, all the while I was still in my workout clothes, and have been dating ever since. I’m so happy to have met him.

Fox: That’s a great story. Ben sounds like a great guy. Where did you grow up?

AB: I grew up in Novi, Michigan, a suburb of Detroit, where I danced competitively and did cheerleading from the time I was 3 years old through high school. My dad recently sold his private dentist practice, and my parents are building a home on the gulf coast of Florida. It will be nice to visit a warmer place, but it’s pretty weird to think that the house I grew up in won’t be ours anymore.

Fox: You’ve been pretty open and vocal about some food issues in the past but seem to be in a pretty good place nowadays. Care to talk a bit about that?

AB: Well, I was a longtime vegetarian, and as I mentioned, not overweight but not fit. When the previously mentioned boyfriend and I broke up I decided to have a steak as sort of an “eff you” to him since he was part of the reason I was vegetarian. Once I started eating meat, I noticed my body composition change pretty fast for the better, but then I went to the other extreme. That first year I was a member I did the LFPB Challenge and was strict Paleo, meaning I pretty much only ate protein. I lost a bunch of weight but was not at all healthy. The next year I did a bit better, and the year after I decided not to do the Challenge at all. I tried a macro-counting program later that year but wound up relying on a bunch of sugar-free crap and developed some bad habits on that diet also. Now I’m in a much better place and have built some healthy habits that I can maintain. I generally eat clean foods but am ok with indulging and not letting it get me down and just getting right back to my next choice. I’m still a work in progress for sure, dealing with food pressure from co-workers can be a bummer, but I’m learning. One funny thing is I eat so many more vegetables now that when I was a vegetarian!

Fox: That’s a familiar trajectory, and it’s great to hear you’re learning what works best for you. Nice work. What were some gym goats for you when you started, and what are you working on now?

AB: Man, I thought I would never get Double-Unders. The big “secret” for me on those was just to practice, consistently. As you (and anyone who reads the blog) may know, Muscle-Ups were a longtime goal of mine, and I put in so much work to get one. I don’t just “have” them now (I’ve done a total of 5), but it was pretty rewarding to finally unlock that achievement. Now I’d like to be able to do them with consistency and also to do Bar Muscle-Ups. AG Strength has built up my upper body strength pretty well, but my legs are lagging behind! I would like to Squat 185 this year. There, I said it.

Fox: Those muscle ups were a long time coming… congrats! Last question: What should we look for in a future AOM?

AB: I think it would be great to highlight someone from one of the specialty populations  like Kids, Teens, Fit 55+, or one of the Barbell Clubs (Starting Strength and Next Level Weightlifting). There are so many people who push hard and inspire there, too. Also moms and dads who are committed to work childcare in and around exercise, introverts who are quietly working hard, and anyone who cheers and supports others.