The goal is unbroken reps with consistent scores.

Warm up and work up to a heavy set of 10 reps. Use spotters on all work sets. 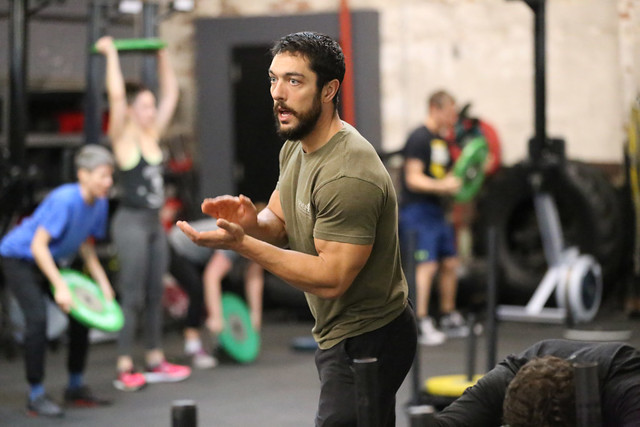 Compare and Despair: How NOT to Approach the Open (or any other workout)

So, the CrossFit Open is rapidly approaching. The Open is a five-week competition that Dave Castro and his sadist team at CrossFit HQ come up with every year to see which athletes will make it to Regionals and, ultimately, the CrossFit Games. For the rest of us mortals, it’s a time each year when we can see how we stack up with the rest of the global CrossFit community, see how we compare to our results last year, and have some fun with everyone in the CFSBK community. Because that what it’s about, right? Fun?

Well, if you’re anything like me, this isn’t always the case. I started CrossFit because I was tired of working out by myself and, while I was strong, I couldn’t do ten Burpees in a row without gasping for air. I enjoyed the challenge. I liked learning new things every day. I was excited by the prospect of a workout that I knew was going to be really hard for me. Where did all of that intrigue and enjoyment go?

The nastiest critic in my life is… me. Nothing is ever good enough. In my head, if I don’t beat (read: DESTROY) my scores from last year’s Open, beat (again: DESTROY) so-and-so in the standings, make it to Regionals, get sponsored, and get a million followers on Instagram, then what’s the point?

I have learned (and by learned I mean over and over and over) that every time I get too caught up in the goal, I become disconnected from reality. Most recently, my coach had me retest Open Workout 17.5. With absolutely no reason or data to back this up, I arbitrarily decided that I should be able to get a score that was TWO MINUTES faster than my score last year. WHAT? I set myself up for failure immediately. I looked at the clock after three rounds, and I was already off pace. That’s when the mental demons kick in for me. “You should just stop, they say, “You’ll never be any good at this. You can’t even reach a goal that you set for yourself. You suck at Thrusters. Your Double-Unders are too slow. Why are you breathing so hard? So-and-so wouldn’t be breathing so hard.” As a result, I started doing worse and worse during the workout than if I hadn’t even set a goal in the first place. I talk to myself in ways that I would NEVER talk to anyone else. If I said the things to any CFSBK member during a class work out that I say to myself, David would boot me out the door.

How did I end up doing on that work out? I beat my score from last year by over a minute. Was I happy? Absolutely not. Instead of being happy that all of my practice with Double-Unders this year paid off or that I was able to breathe while doing the Thrusters after practicing breathing and bracing all year, I decided to be angry and beat myself up for the rest of the day because I hadn’t reached the unattainable benchmark that I had set for no reason.

It’s easy for me to get obsessed with a goal and to completely take for granted how far I have progressed. This year in the Open I want to push myself hard physically as much as I can while still being able to recognize the improvements that I have made. I want to enjoy being around everyone while they try as hard as they can. I want to cut myself some slack if I don’t perform how I hope to. If I am able to do this, it be a huge mental PR for me.

If you’re thinking about doing the Open, DO IT. The energy in the gym is electric, and people end up doing things every year that they’ve never done before. It’s not about beating others but seeing how far you’ve come this year. Does that mean you do it perfectly? Hell no.

_____________________
Yesterday’s Results Board: Rest Day
Toes-to-Bar: Getting Them, Improving Your Efficiency, and Using Them to Build Your Squat Athlete Daily
Lift Weights, Eat More Protein, Especially if You’re Over 40 NY Times