Try to stay uncomfortable on this one today. 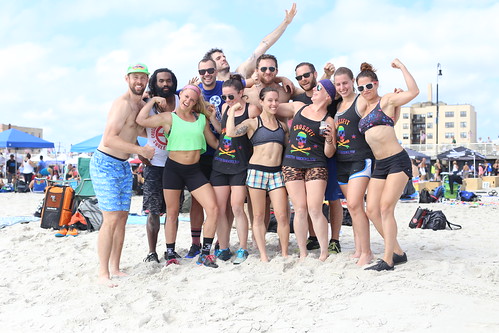 Throwback Thursday: Team CFSBK, uh, flexing at last year’s Flex on the Beach. A bunch more CFSBKers will be competing at Flex on the beach 2017 this weekend in Long Beach. Need an excuse to go to the beach this weekend? Now you have one!

2017 marks CFSBK’s 10th year worth of TBTs. Woohoo! This shindig goes down the evening of Saturday, September 30th from 8pm to 1am. The traditional 10th anniversary gift is tin or aluminum, but we don’t want your recyclables. We just want you to show up, drink some drinks, get down with your gym buds, and help us celebrate 10 years of making Brooklyn a better, fitter borough! Get stoked!

CFSBKer Tamson W. is co-writing a chapter book series with Emily Calandrelli, a correspondent on Bill Nye’s show on Netflix, Bill Nye Saves the World. Two books in the series that have been released so far are: Ada Lace on the Case and Ada Lace Sees Red. They feature a no-nonsense heroine who loves science and shuns mumbo-jumbo (e.g., fake news). She uses her engineering prowess to get in and out of trouble in equal measure. Be sure to pick these up for your CrossFit kid! And congrats to Tamson!
_____________________
Yesterday’s Results Board: Back Squat | Thrusters, Muscle-Ups
In Defense of the Hip Thrust Eric Cressey
What We Know about the Climate Change-Hurricane Connection Scientific American