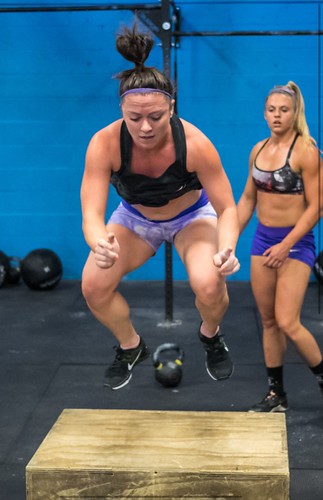 Athlete of the Month: Katie Egan

This month we recognize Katie Egan, a pocket-sized Bostonian who has really impressed the coaches lately. Not that we’re all that surprised, though. We could see her potential right away when she first started with us. Since then she’s shown great patience, dedication, coach-ability, and ability. Read on, and don’t forget to ask her to tell you a cheesy joke!

Fox: Congrats! Your name has been mentioned for a few months now for AOM and finally, here we are. When and how did you first start CrossFit?

Katie: Thanks! I’m almost embarrassed about this. I’d done CrossFit a few times up in Boston in 2014 when my ex-boyfriend, Scott, convinced me to try it out. When I moved to Brooklyn that year I came to CFSBK and started coming regularly that October.

Fox: Exes can always be good for something. I’m glad we got you in the split! What were your first impressions of CrossFit, and what were you doing before?

Katie: Well my first impression during my “test out” class with David, was that I really sucked at some stuff and that I didn’t really know what a Squat was. I remember the workout was some intervals of 270m runs and 20 Pull-Ups. I couldn’t do 4 Chin-Ups with the help of a green band. I’d done “weight training” in college but quickly learned that those Squats were bullshit. It was humbling but also frustrating enough to make me want to improve. Before coming here I was doing a bunch of random stuff: SoulCycle, home bootcamp video workouts like Insanity, and the occasional run. In college I played soccer (with fellow CFSBKers and roomies Toni and Allie!) and used the student gym, but I hadn’t been going to a gym regularly since school.

Fox: I’ve heard someone say that you are the best athlete they’ve ever been around. You must be pretty impressive on the soccer pitch! Were you always into sports and physical activity?

Katie: That’s quite the overstatement! I have always been around athletics though. My two older brothers were wrestlers, and I played multiple sports once I was old enough so a lot of our time as a family was spent traveling to and from youth sporting events. In high school I played soccer, basketball, and despite my lack of talent at it, became the captain of our tennis team. (Ask me about the time I took a speeding tennis ball to the eye.) Even between the three of us, our parent’s somehow managed, in addition to both working as full-time nurses, to make time to support us in sports. I’m really grateful for that.

Fox: That’s awesome that your parents helped keep you all involved in being physical. What was it about CrossFit that made you stick to it?

Katie: Besides that fast that I’m a bit stubborn and wanted to get better at Pull-Ups and do real Squats? In college I played on a D1 soccer team that was pretty competitive, and I’ve always loved to compete. CrossFit filled that hole for me that was missing once I wasn’t in team sports anymore. It also reminded me a little bit of a class that our high school gym teacher would run that he called “Gut Check.” It was just a mix of HIIT type exercises, but it was fun and I always felt like I was working hard.

Fox: Where’d you grow up? And what brought you to Brooklyn?

Katie: I grew up in Hanover, Massachusetts which is a suburb of Boston. My parents and brothers are all still there. I came to Brooklyn in 2009 for college when I attended the nursing program at LIU. I honestly always thought I’d return to Massachusetts but I did an internship that led to employment and started working right after school. Between school, soccer, and work, I’ve developed some strong friendships that have kept me here. I didn’t love Brooklyn at first, but I do now. I also didn’t love that first job, but I recently switched to another location and things are looking up.

Fox: What do you do outside of work and working out?

Katie: I love my time spent playing under the Brooklyn Bridge Park lights with the CFSBK soccer team, and also love our after-game drinks at Sweet Polly. I like going on long runs, regularly covering miles in Prospect Park and Brooklyn Bridge Park. I also like to travel with friends when we can. I’ve got a group of 5-10 girls from my college soccer team who travel once or twice a year together. We’ve recently been to Nashville, New Orleans, and Denver. I’m usually the one trying to plan outdoorsy stuff like hikes but we’ll often just spend time chilling out, laughing, and catching up.

Fox: You mentioned that you love to compete. Have you done any CrossFit comps?

Katie: Yes! KHarpz and I recently took first place at Hail to the Team! Granted there were not many Rx’d women’s teams but it was still fun. We’re also doing Flex on the Beach together with Brett and Phil, which I’m excited for. I’ve only done team competitions so far so I’ll have to sign up as an individual at some point, I guess.

Fox: What were some things you first worked on in CrossFit, and what are you currently working on?

Katie: Pull-Ups and Chin-Ups, as I mentioned before. Now I’m working on consistent Butterfly Pull-Ups. It’s kind of funny: I always thought I’d just be one of those people who can’t do Pull-Ups, so it’s really cool to see the progress there. I’ve even done a few Bar Muscle-Ups but would like them to be consistent as well. I’m doing an Active Life Performance Care program, Bulletproof Shoulders, that I was given from the last seminar. Then also, like everyone, Olympic lifting is always a work in progress. I like to set different goals for each training cycle, it helps to keep me focused on making small progress throughout. I’m also working on simply getting stronger. Last cycle I made a point to do harder versions of the workouts and not to modify or scale if I could do the Rx’d loads and movements. I accepted that my times would be slower, and I wouldn’t worry about about my speed as much.

Fox: What’s something about you that most people don’t know?

Katie: Hmmm… I love to sing and dance to just about every kind of music, from 70’s rock to current teeny bopper stuff. I also love cheesy jokes and one-liners. I heard a great one recently when a random guy approached me on a grocery store checkout line: “What do you call a line of rabbits marching backwards?” … “A receding hairline!”

Fox: HAH! I love awful jokes. Last question… What should we look for in a future Athlete of the Month?

Katie: Someone with good training habits, who’s always pushing and doing a little bit extra to improve. I think positively affecting others is also important, whether it’s verbally supporting a classmate when they could use it or inspiring people through your actions to perform to their very best.