The pull from the floor should be purposeful and balanced, with your weight balanced over mid-foot. Aim to make 3-5 reps between 85-95%. This is not necessarily a testing day, but if you’re making all your reps and feeling good then go for it. If not, then get a few heavy reps in and live to snatch another day.

Aim to move steady and relatively unbroken on the Box Jumps and keep an aggressive pace on the run. Complete the Wall Balls in 1-4 sets. 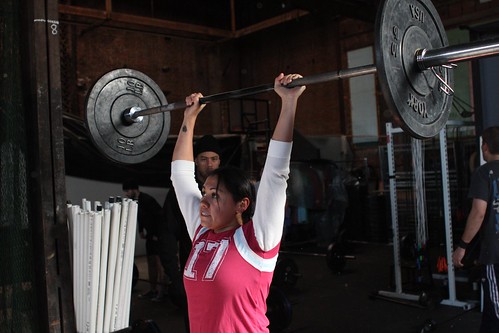 TBT: Coach Jess moves the bar overhead during CFSBK’s last day at the Brooklyn Lyceum in 2009. Help us celebrate 10 years of making Brooklyn a fitter place at our 10th Anniversary Party on September 30th!

As you may have noticed we’ve added a Frequently Asked Questions page accessible under Member Resources on the blog (to the right). Many thanks to Coach Chris Fox for writing this page! To draw your attention to the FAQs and to refamiliarize everyone with some important stuff, we’ll be reposting some of these questions and answers to the blog. First up…

WHAT IS THE DIFFERENCE BETWEEN “FITNESS” AND “PERFORMANCE” PROGRAMMING?

Instead of having “Beginner,” “Intermediate,” and “Advanced” classes held separately, we program every class to accommodate the full range of members from novices to competitive CrossFitters alike. Member feedback on removing obstacles from coming to the gym led us to this approach years ago, and now there’s no longer a schedule barrier (on our end at least) for when you can take a class.

All of our new Foundations graduates begin their CFSBK career by following “Fitness” programming for a recommended period of 6 months (or about two cycles). “Fitness” and “Performance” programming happens within the same class and are usually more similar than different. For example, Performance Back Squat programming might read: “Work up to a max effort set of 3 for the day,” a very high intensity effort that is appropriate for a more experienced athlete. On the same day, Fitness Back Squat programming might read: “3 sets of 5 repetitions performed at a moderate load,” allowing a newer or de-conditioned athlete to get in some volume and practice with the lift at much more approachable loads without coming near failure. Similarly, we may program higher-skill versions of gymnastics movements for “Performance” than we would for “Fitness.” As an example, if “Performance” programming calls for Ring Muscle-Ups, the “Fitness” version might call for Pull-Ups and Dips, and have some further scaling option for those movements as well. Again, both versions of programming happen within the same class, use the same time stamps, and are more similar than different. Not sure which you should do? Ask a coach!