The pull from the floor on the Snatch High Pull should be purposeful and balanced, with your weight balanced over mid-foot. Replicate that same pull on the full Snatch. Aim to make a rep or two at/above 85-90%.

Short one today, but that doesn’t mean easy. Go hard, no pacing. Make this one hurt a bit. 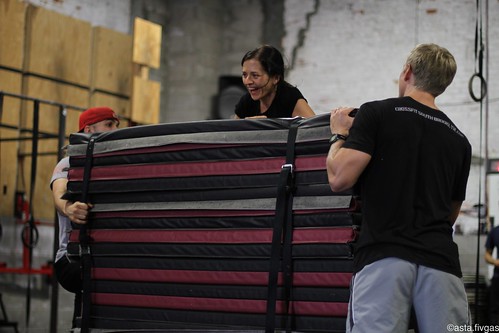 TBT: This week(ish) 5 years ago, Barbara K. scaled a wall consisting of some mats plus Coaches Noah and McDowell. Want to help us celebrate 10 years of making you do silly stuff in the name of fitness? Read on!

2017 marks CFSBK’s 10th anniversary. Woohoo! This shindig goes down the evening of Saturday, September 30th (exact time TBD). The traditional 10th anniversary gift is tin or aluminum, but we don’t want your recyclables. We just want you to show up, drink some drinks, get down with your gym buds, and help us celebrate 10 years of making Brooklyn a better, fitter borough! Get stoked!

_____________________
Yesterday’s Results Board: Back Squat / Front Squat | Run, Single-Unders, Handstand Hold
Why We Fell for Clean Eating The Guardian
What Happens If We Throw an Elephant from a Skyscraper? Kurzgesagt