Scale the Double-Unders to Single-Unders or 1/2 attempts as needed. The Dumbbell Thrusters should be heavy for you. Rx is 45% of bodyweight. 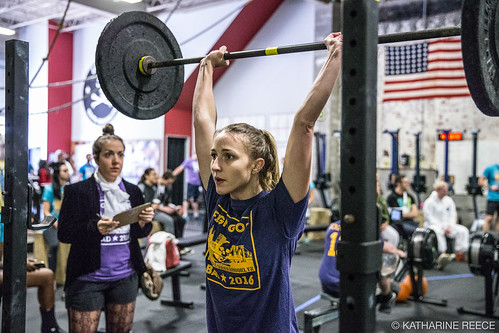 Last week marked the return of Better Know a Member, a blog-favorite in which we profile members from across the CFSBK community. First, we got to know Tori P. a little better. This week we talked to a member who, among many other virtues, has a very cute dog named Reesa.

Name (and any nicknames):

Molly Hess, Moll, Mollz, and my favorite, Holly Mess (switch the first letters of my first and last names and voila)

Where were you born and where did you grow up?

I was born and raised in Morristown, NJ. It’s a big-ish suburb about 45 minutes outside of NYC, although I had very little exposure to the city while I was growing up—my parents are not city people.

How long have you been CrossFitting, and how did you arrive at CFSBK?

I actually started CrossFitting around ten years ago at my high school in Morristown! One of my gym teachers was a weightlifter and also ran his own box out of a garage in Denville, NJ. At the time, my prospective college field hockey coach had seen me play and told me I had to get stronger because I was getting knocked around on the field, so I went to my gym teacher and he developed Crossift-lite programming that I used to do in the weightlifting room with the football team after school!

After 2 years of college field hockey and a few years of being very into running during and after college, I got bored and had heard amazing things about CFSBK through my boyfriend. I’ve subsequently been at the gym for around 2 and a half years now.

Ask me about that time I…

Had lunch with Monica Lewinsky! My agency worked on an anti-bullying campaign with a nonprofit called Bystander Revolution that she was advising at the time. After years of cyber bullying and public shaming that was basically at the advent of viral content on the internet (she has a really good TED Talk on public shaming here), the anti-bullying cause had become very dear to her. She was very thoughtful and smart (London School of Economics grad!). It just shows how much your perspective of someone can change once you actually get to know him or her.

What TV shows are you recommending right now?

I’m almost finished with The Handmaid’s Tale, which I’m loving and is strangely relevant right now. We’ve also been binging Veep. Richard is my favorite character!

Did you have any mentors or heroes growing up?

I know this is going to sound cliché, but I have to say my mom! She was a stay-at-home of four kids who was also in killer shape and very creative. She was (and still is!) very much into the triathlon and running scene, so I grew up around a lot of runners and cyclists. She also always stressed the emotional/psychological benefits of being active. She very much comes from the mentality of pulling up your boot straps and working hard to get something done, no excuses. She also used to tell me, if I wasn’t feeling well, to “go for a run and you’ll better” (tough love, huh?). And almost always, I did!

I also used to be mortified because she would pull over on the side of the road to pick furniture out of people’s trash, but then she would refinish it into something so cool and beautiful. Both of my parents really instilled in me a good German work ethic and resilience.

What are you up to when you’re not at 597 Degraw Street?

I work at a communications/PR agency called Praytell in Crown Heights. I’ve been there for just over 3 years. We’ve grown from a team of 12 in Brooklyn to over 75 in SF, LA, Austin, and Chicago and were bought by a holding company last summer! I work on social media and digital projects for mostly tech and nonprofit companies. Right now, I’m working on a campaign called Keep Birth Control Co-Pay Free!

I love being so close to Prospect Park and the solace it brings from the city in general, so Liam and I will bring our corgi, Reesa there, even in the dead of winter. I’ve also tried to be better about doing more activities around the city (not just Brooklyn) and really take advantage of all it has to offer – in the past few months we’ve gone to the Met and the Natural History Museum, and did a whiskey/wine tour at Kings County Distillery. More suggestions are welcome!

Any advice for new CFSBKers?

For the first few months, you’re going to feel pretty lost in class (am I holding this bar right?) and be pretty sore, like, all the time. But (consistent) practice makes perfect! Don’t get too in your head about comparing yourself to other people and instead focus on growing your own skill set.