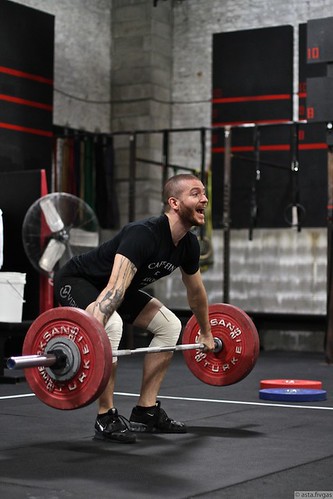 Here is Todd C with a solid position during the first pull of a recent Snatch. Note the following 5 things:

1. His back is in full extension and his eyes are looking forward. A rigid spine is necessary for safety as well as effective force transfer through his body. The forward gaze helps keep his chest up and makes coming to full extension at the top of the pull more likely.

2. The bar is balanced over his mid-foot, indicating that he is pulling his knees BACK out of the bar’s path, not moving the bar forward around his knee. Allowing the barbell to trail forward off the floor is one of the most common errors we see at the gym. When you start your pull, stay compact and think about keeping the barbell over the knot of your shoe laces until you clear your knee.

3. Todd’s knees are pushed out, which helps him get into a better start position by facilitating more room for hip flexion. It’s common in a snatch to have your knees literally touching your arms in the initial set up. Not doing this causes an impingent of the thigh and lower abdomen which makes setting your back and achieving an effective start position difficult for most and impossible for other. KNEES OUT!

4. If you drew a plumb line down from Todd’s shoulders, you’d note that they were forward of the barbell, not directly over or behind it. This is an optimal pulling position which will allow him to generate a lot of force when he begins to quickly extend his back during the second pull. This position is achieved by the hips and shoulders raising at the same rate when the lift is initiated. A common error is to either shoot one’s hips up first or prematurely lifting the chest which will decrease your leverage into the rest of the lift.

At CFSBK, we love to celebrate the gains and accomplishments of our athletes! Below are some recent PRs that people wrote on the board above the wrestling mat, listed in no particular order. Congrats, folks!

QOD: What goals have you achieved in the gym recently?

_____________________
How Exercise Helps Us Tolerate Pain New York Times
Reebok Jumps on Paleo Bandwagon With Its Own Brand of Bacon The Washington Post
Sleep Hack: Keep Your Feet Outside Your Covers Science of Us
New Nike Running App Tells You What You’re Really Running From The Onion