Workout of the Day

Notes:
The two suggested loading options are named after the late Sylvia Rivera and Marsha P. Johnson in honor of their contributions to the LGBTQ movement. 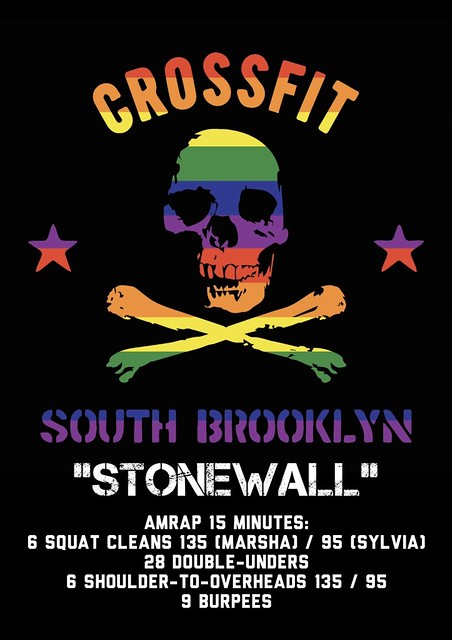 Today we’re running a workout called “Stonewall,” which we created 5 years ago in honor of the 1969 Stonewall Rebellion. Stonewall was a weekend-long demonstration and riot at the end of June against police raids and harassment at the Stonewall Inn in Greenwich Village, which many mark as the birth of the modern LGBTQ rights movement.

What is lesser known about the Stonewall Rebellion and the growth of the LGBTQ rights movement is that it was led by transgender women of color, Sylvia Rivera and Marsha P. Johnson. While the LGBTQ rights movement has made a lot of progress over the past few decades, there is still a long way to go, particularly for members of the trans community who face significant discrimination and violence. For this reason, CFSBK’s Pride weekend workout will be a benefit for 2 nonprofit organizations serving the trans community: the Sylvia Rivera Law Project and Marsha P. Johnson Institute. The suggested loadings in the workout are named after the late Sylvia and Marsha in honor of their contributions to the LGBTQ movement.

Please use the links above to donate to either or both of these great causes. CFSBK will also donate $10 for every member who performs todays workout (with funds split between both orgs). There will also be a Short Circuit version of Stonewall today to include those folks!

CFSBK STATEMENT OF INCLUSION AND ANTI-OPPRESSION

CrossFit South Brooklyn recognizes the dignity and worth of every person and is committed to creating an environment that is safe, accessible, inclusive, and respectful of all members and visitors. To create this important space for our community, we do not tolerate oppression on the basis of race, ethnicity, economic status, gender/gender identity, sexual orientation, immigration status, religion, ability, age or appearance.