Notes:
Choose an exercise/workout that corresponds to what you have not performed in the prior few days or what you’re least sore from. For the barbell movements, you may also consider adding a secondary lower skill bodyweight/DB exercise to create a superset.

Tomorrow we have Front Squats, push-ups and wall ball.

Notes:
Perform the first couplet then transition right into the second. 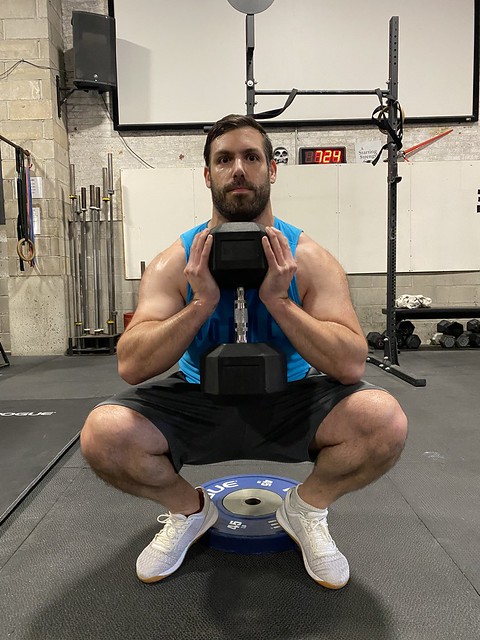 Eric working his quads with some cyclist squats

CFSBK has celebrated LGBTQ Pride Month in a variety of ways over the years. In 2013 we wrote and started hosting a workout named “Stonewall” in honor of the 1969 Stonewall Rebellion. Stonewall was a weekend-long riot and protest at the end of June against police raids and harassment of LGBTQ people at the Stonewall Inn in Greenwich Village, which many mark as the birth of the modern LGBTQ rights movement. We’ll be running “Stonewall” at the gym and in virtual classes Saturday, June 26th.

What is lesser known about the Stonewall Rebellion and the growth of the LGBTQ rights movement is that it was led by transgender women of color, such as Sylvia Rivera and Marsha P. Johnson. While the LGBTQ rights movement has made a lot of progress over the past few decades, there is still a long way to go, particularly for members of the trans community who face significant discrimination and violence. For this reason, CFSBK’s upcoming Pride workout will be a fundraiser to benefit 2 nonprofit organizations serving the trans community: the Sylvia Rivera Law Project and the Marsha P. Johnson Institute. CFSBK has been a proud supporter of these organizations over the past 4 years and supports them in the centering of Black trans lives and, in the spirit of Stonewall, the fight to end police violence. This will be a free class for our members and we ask that you all donate $25 or more to either or both of these organizations. We will have a kiosk set up in the gym as well ask links to donate on the website.

Pull the Pin Programming Teams Up with CrossFit Faru, Trains Anti-Poaching Team in the Serengeti – Morning Chalk Up