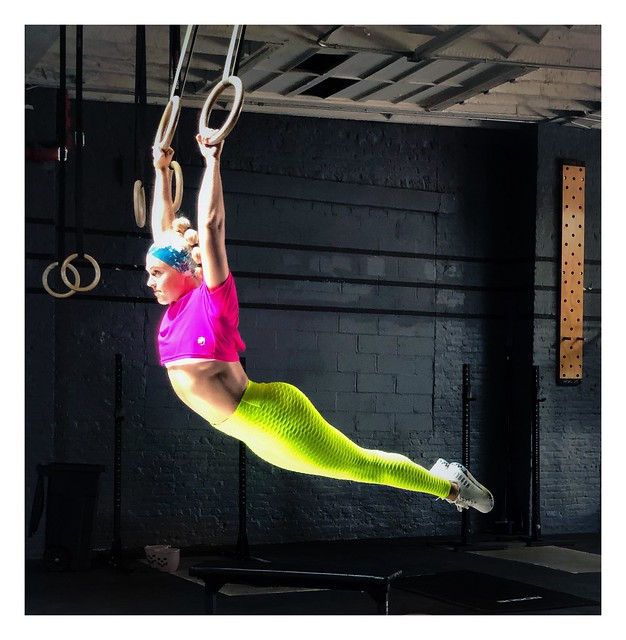 The following interview by Josh S is a repost from December 11th, 2018.

Underneath the Hoodie: Katie Harper

Q: What do you call a noodle in disguise?
A: An impasta!

That’s Coach Katie Harper’s favorite joke, and it’s one key to understanding the woman we call “KHarpz.” The other key is that she’s what we at CFSBK call a TFBA. That’s the yin and the yang of Coach Katie: totally goofy and deadly serious, easygoing and hardcore, banjo player and Doctor of Physical Therapy, happy-go-lucky and competitive to the bone. Keep that in mind.

Katie Harper was born in Montgomery County, Maryland in the Washington, D.C. burbs. An only child until the age of 14, she learned to keep herself entertained, mostly by exploring, rolling around in the dirt, and just generally “getting as gross as possible.” Katie would ride bikes with the neighborhood kids and was extremely proud of her red Razor scooter. “I could do some sick 2-inch jumps,” Katie still proudly reports. Watch out for her in the Razor Scooter event of the 2021 CrossFit Games.

Rolling around in the dirt and doing sick jumps wasn’t the only way Katie kept busy. Naturally curious, she has always loved to tinker. One afternoon she and the neighborhood kids took apart a whole oven and gazed with fascination at the heating coils. Her grandfather taught her how to use tools, and she spent lots of time in the garage building things and taking things apart—more building than taking apart. Katie got do lots of traveling all over these great United States in her grandparents’ rusty old Ford Econoline van. She and her mom and aunts and cousins and grandparents would all pile into the RV and drive all over the Midwest visiting family.

Katie’s childhood may sound idyllic, but like most childhoods, hers was punctuated by moments of great sadness and feelings of instability. At the age of 12, her parents got divorced, and Katie described this time to me as a fragile, traumatic period. With time and communication, however, Katie has ended up getting along with everyone in her family, which is not exactly a surprise if you’ve observed how well she gets along with everyone at the gym. She’s happy to have a stepsister, Jackie, and her stepdad is her best friend.

Many good things came out of this difficult period. Quality time with her dad, for example, got even more quality. He made Katie watch sports—the NBA, NCAA basketball, the NFL, and anything else that happened to be on TV—which cultivated her love of competition. This all culminated in her dad buying her a football referee video game; as in, it was a game in which you played football but a game in which you were the ref. Insanely boring, but the tradeoff was that he made sure she knew how to throw a football.

As a shy high schooler, sports were Katie’s way of socializing and having fun. Her athletic pursuits stretched all the way back to the age of 4, when her mom signed her up for gymnastics because she kept running into walls. It helped with her balance, and because she’s a born-and-raised Marylander, Katie started playing lacrosse at 5 years old. It was with those neighborhood kids again—no regulation sticks and their goalie was a trashcan. So by the time Katie got to high school she was playing field hockey, track, and lacrosse—this time with a real goalie.

Athletics and music have always been dominant themes in Katie’s life. Her family founded the yearly Old Songs Folk Festival in 1980, and she’s been going to camp on the outskirts of the festival ever since she was a young child. Folk music is in her DNA, so when she finally got to New York, one of the first things she did is start going to open mic night at The Bitter End. Katie’s longtime love of folk music recently led her to take up the folkiest instrument she could get her hands on, the banjo, and she’s been taking lessons at the Jalopy Theater’s School of music to get that twang just right.

If Katie’s DNA is 50% folk, the other 50% is Terrapin—no, not the turtle (that’d be weird, wouldn’t it?) but the University of Maryland Terrapins. She’s a diehard fan, which makes sense given that she practically grew up on campus. Both of Katie’s maternal grandparents are psychology professors at Maryland, and her grandpa started bringing her to campus as a young kid, putting her to work as his “TA.” This may have been in violation of child labor laws, but Katie loved it, and it cemented her status as a diehard Terps fan for life.

When it came time to pick a college, Maryland was a no-brainer. And as you may have already guessed, playing a sport was also a no-brainer. By this point, she had already tried just about every sport you could imagine, including swimming and diving, but as Katie told me, she’s “always been better at things that require a stick.” So Katie joined the UMD club lacrosse team and signed on for practice 5 times per week.

Then came The Great Ankle Sprain of 2010. “Ironically,” Katie told me, “I was a little tipsy and trying to jump up to grab a strip of yellow CAUTION tape from a balcony. I rolled down half a flight of stairs. Good times.” Katie’s 15-year lacrosse career was all but over, and she couldn’t walk properly for 6 months. But this incident led her to her current passion and career path. Unable to play lacrosse, Katie turned to triathlons. And when tri training got boring… well, you probably know what happened next.

In 2012, not long after she graduated from UMD, Katie’s friend convinced her to join a small garage gym called CrossFit Critical Mass, and she hopped aboard right after Thanksgiving. There were only 8 members total, and she had no idea what CrossFit was when she started. But a small gym with a tight-knit group meant lots of 1-on-1 attention, and the coach kept encouraging her to come back. She quickly found herself hooked.

By the time she graduated college, Katie knew she wanted to be a physical therapist but still wasn’t sure exactly how she would approach it. The integrative, holistic approach of CrossFit that she was introduced to at Critical Mass helped her to see how all her interests could fit together. At the time, she was working as an aide at a physical therapy clinic. Seeing the potential to join her love of movement and her desire to help people, Katie started applying to Doctor of Physical Therapy programs.

Katie took advantage of rolling admissions and applied to the PT program at Long Island University, Brooklyn. The rest, as they say, is history. Katie had become aware of CrossFit South Brooklyn when we hosted the announcement of Open Workout 13.2. So when the acceptance from LIU came through, she immediately knew that CFSBK would be her gym. She joined as a member not long after arriving in Brooklyn in July 2013 and took advantage of that sweet, sweet student discount.

Many blog readers can probably relate to Katie’s story: she was nervous to move to a new place, but CFSBK quickly became home. Right away, she noticed that CFSBK’s athletes were serious, and she found that a bit intimidating at first. Everyone was incredibly friendly, but the environment wasn’t as cheerleader-y as it was at her previous gym. When she looked at the blog to prepare for class, she had no idea what the percentages meant, and her mind was blown when people broke out the fractional plates on Back Squat day. CFSBK athletes knew themselves better.

But far from turning her off, this new training environment helped her get more serious about CrossFit. Not surprisingly, Katie tends to get laser focused on things that are important to her, so her classes at CFSBK became the perfect complement to all of the understanding and mastering she was doing in school. Around this time, she got her CrossFit Level 1 Trainer certification to better understand the relationship between CrossFit and physical therapy.

KHarpz also go injured around 2 months into her training, hurting both her shoulders and probably tearing her right rotator cuff. It took her close to 6 months to fully recover, but she came back stronger and healthier than ever and experienced another big mental shift in her approach to CrossFit. One day in the summer of 2014 Coach Ro said to her, “Let’s get a team together. We’re gonna go to Regionals.” That was exactly what she needed to hear. “If Ro thinks I’m good enough to go to Regionals,” KHarpz thought to herself, “I’m gonna go to Regionals.” She just needed that push, that voice to tell her she had the right stuff. It’s been her goal ever since.

Reaching that goal would mean dedicating more of her life to The Sport of Fitness, so the move to coaching was a natural progression. She first approached Coach David right before the shoulder injuries, when she still wasn’t so sure. David gave her a good perspective on what it would be required to become a coach. Katie was still in the thick of grad school at the time and didn’t really know what the future would hold. She thought long and hard about what she wanted for her life and career, ultimately deciding that she wanted to stay in New York for another 3 years.

8 months later, she approached David a second time. Katie had decided that coaching was in her future, and David agreed to bring her on. The biggest challenge, she says, was getting past what she calls her “situational shyness.” Talking in front of groups was her biggest fear, so right away she set about trying to become more confident, to curb her fumbling and “nervous rash talking.” It was the best feeling in the world when she started to feel comfortable at the whiteboard.

As far as training for Regionals goes, that situation has changed a bit, as you may have read, for reasons way beyond Katie’s control. But she recently qualified for Wodapalooza, which takes place in January in Miami, and a bunch of CFSBKers are headed down to cheer her on. She also recently left her full-time physical therapy job to focus completely on coaching and her own training. Coach Keith, who KHarpz calls “The Overtraining Police,” has helped in both respects. He keeps her honest and grounded.

What does the future hold? Well, for one thing, Katie wants Coach Whit to teach her how to surf. For another, Katie wants to be one of the more sought-after physical therapists for CrossFitters and weightlifters. One thing that is certain: she’s already an excellent coach. I’ve personally taken more than a few classes with her and can report that that situational shyness is gone. Coach KHarpz is completely herself: fun, funny, but completely focused on the members she’s training. As we did our interview for this piece, she housed a plate of steak and eggs to fuel her training. “I’m gonna eat breakfast for all 3 meals today,” she proclaimed. And we all know Katie finishes what she starts.